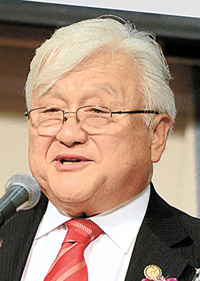 California Congressman Mike Honda, best known for spearheading a U.S. resolution in 2007 asking Japan to apologize for its enslavement of “comfort women,” said his patience for securing justice for the surviving grandmothers was running low.

Honda has been an active voice on the issue of the Imperial Japanese Army’s forceful recruitment of young women and girls into sexual slavery before and during World War II and urged the administration of Prime Minister Shinzo Abe to take responsibility for its past.

“Education is my passion; I believe it is the most powerful tool and investment we can provide our children,” Honda said as he spoke at the Asan Institute for Policy Studies in central Seoul on Friday. “Education also means being able to teach others so that they can learn from our mistakes and flourish as a society.”

The congressman, a Democrat, has served as a member of the U.S. House of Representatives for more than 12 years.

He continued, “I have spent the last 20 years educating people about a historical issue that has grown very close to my heart: that of the 200,000 World War II sex slaves known as comfort women. These young victims were forced into dehumanizing sexual slavery, forced to serve up to 30 to 40 soldiers a day. They suffered serious physical, emotional and psychological damages.”

On July 30, 2007, the U.S. House of Representatives passed the landmark Resolution 121, initiated by Honda, which stipulates that the Japanese government acknowledge its wartime past and officially apologize to the women affected by its transgressions.

“The survivors are dying by the day,” he said. “We need to get this right. I hope and pray that Japan’s leaders do the responsible thing: to act in first by finding a pathway to resolving this issue once and for all.

“This issue is not only a historical issue, it’s about violence against women, especially in times of conflict,” the congressman added.

Honda recalled the United States’ own historical internment of Japanese-Americans during World War II, between 1942 and 1946.

“As someone who was put into an internment camp as an infant during World War II, I know firsthand that we must not be ignorant of the past, and that reconciliation through government action to admit error is the only one likely to be long-lasting.”

It was only in 1988 under the Ronald Reagan administration that the U.S. government officially passed the Civil Liberty Act, which offered a formal apology and compensation to the Japanese-Americans placed in internment camps and their descendants.

Honda, a third-generation Japanese-American, pointed out: “Our government made a mistake, but they apologized for it and healed many wounds as a result. Japan must now do the same.”

The American representative spoke on the topic of “Peace and Prosperity in Northeast Asia,” which touched upon the relationship between the United States and South Korea, the unification of South and North Korea, and the potential for economic cooperation.

He followed his address by answering questions from scholars and the media.

“My message here is very simple. Peace and prosperity in the Asia-Pacific region cannot be realized until the government of Japan fully accounts for its history and justice for the sexual slaves of World War II is achieved,” he said.

Honda was on a five-day trip to Seoul as a part of an exchange program between Korean and American lawmakers.

As a congressman representing Silicon Valley, the hub of technology and innovation, Honda further outlined the potential for consolidating ties between Korea and his district, voicing support for the Park Geun-hye administration’s creative economy initiative that emphasizes science and information and communications technology.

“I believe Silicon Valley and Korea can both agree that technology is the ultimate game changer,” he said. “As Korea looks for more investment opportunities, and as we realize and capitalize on synergies among institutions in the [San Francisco] Bay Area and Korea, our relationship will get stronger and stronger.”

He added that the U.S. immigration system must be changed to enable Korean and other foreign graduates to stay in the United States and for entrepreneurs to establish businesses.

Honda held talks with President Park Geun-hye later that day to discuss issues such as the Korea-U.S. alliance, North Korea policy and a forward-looking Korea-Japan relationship.

He held talks with Minister of Foreign Affairs Yun Byung-se and other Korean government officials on Thursday.

He also visited the House of Sharing, a home for former comfort women in Gwangju, Gyeonggi.