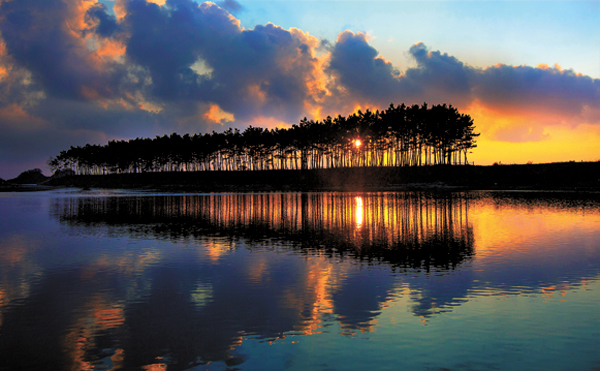 A view of a seawall covered with pine trees at sunset on Anmyeon Island in Taean, South Chungcheong. [JoongAng Ilbo]

Witnessing the first sunrise of the New Year is no easy feat. You have to endure the aching cold for hours just to experience a few seconds of delight. And if you can’t find transportation to your destination because of the crowds, you won’t even be “fortunate” enough to feel the freeze.

However, most people still feel like it is worth going to feel energy not just from the sun but from the positivity of the people who are there to wish for a happy year ahead.

But where should you go to welcome the New Year?

The most popular area to visit is Jeongdongjin in Gangwon, but it is more like a war zone than a peaceful travel spot at this time of the year. On Jan. 1, up to 100,000 people usually visit the area.

Because no visible islands or rocks can be seen in the sea at Jeongdongjin, it is possible to enjoy an unobstructed view of the sunrise. 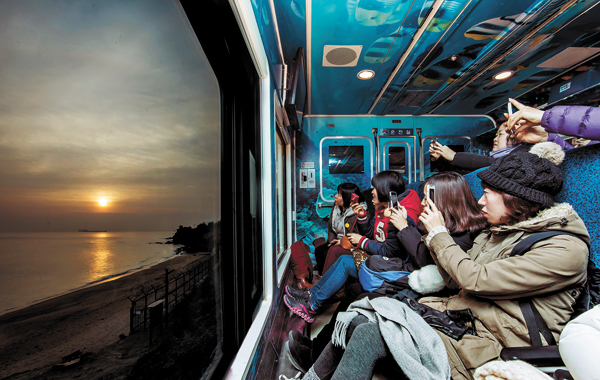 People take a photo of a sunrise on the train to Jeongdongjin, Gangwon.

However, if you prefer seeing objects basked in sunlight and shadows, this is not the place for you.

For people who want this, Ganjeolgot in Ulsan might be a better option. It has the added bonus of being the area in the nation where you can spot the sunrise first - although this is only by a few seconds.

From a hill near Ganjeolgot it is possible to see a view of the sunrise in harmony with an old lighthouse constructed in 1920.

Even an amateur photographer won’t find it difficult to get a great shot of the two juxtaposed in a photo.

Homigot in Pohang, North Gyeongsang, is also well known by frequent sunrise watchers. A gigantic sculpture shaped like a hand in the sea makes it look like the palm is trying to grasp the sun as it rises.

There are some places where you can watch the sunset as well as the sunrise. Dangjin in South Chungcheong is technically near the West Sea, but Waemok village in Dangjin is surrounded by water, so it is possible to see the sunrise from there when you go uphill.

Ttangkkeut Village in Haenam, South Jeolla, meanwhile, is also an area where visitors can appreciate both the sunrise and the sunset.

Expectations for sunrise are big, but the core experience lasts a very short time. The grandiose view of the sun touching and rising above the horizon could disappear in the blink of an eye.

If you’re lucky, you can have less than 10 minutes to appreciate the view with your naked eye, take a photo and share the feelings you are experiencing at that moment with friends and family - or even the strangers at the spot with you. 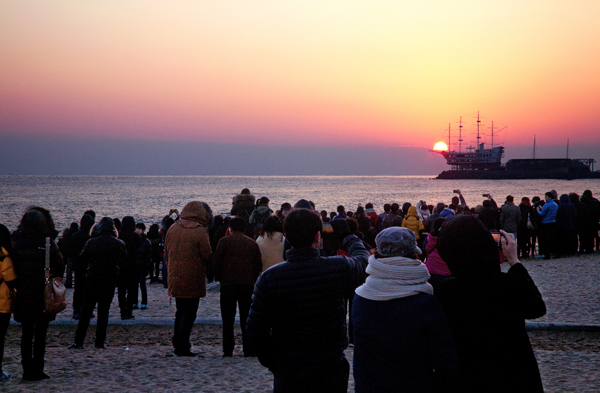 A view of a sunrise in Jeongdongjin.

To make the festive moment last a little longer, areas known for their sunrise and sunset views usually host festivals as well.

Another good thing is that most of those festivals are free.

At Jeongdongjin Beach in Gangneung the Sunrise Festival starts at 8 p.m. on New Year’s Eve. Musical performances accentuate the hype for sunrise ahead of a countdown to the New Year.

Gyeongpo Beach, which is nearby, has fireworks at midnight.

Byeonsan Beach in Busan hosts the Byeonsanbando Peninsula Sunrise and Sunset Festival a little earlier at noon on New Year’s Eve. People can catch clams in the nearby mud paddy and can try building a sand castle on the beach.

Other events where people are invited to cook food and eat on the beach are also popular for keeping young ones entertained until dawn.

The Sunrise Busan Festival is a popular festival for travelers near the year’s end, too. It starts at Mount Yongdu Park with a concert and a bell toll and then moves to Haeundae Beach to welcome the New Year.

Some brave visitors can even challenge themselves by swimming in the cold winter sea water.

The organizer will provide sheep at the festival so that visitors can feed the animal and take photos with them to welcome the Chinese zodiac’s Year of the Sheep.

Taking a train to the sunrise

Traffic is guaranteed during New Year’s Eve. So forget about congestion and take the train instead.

Korail has packages for people travelling to see the sunrise. A two-day ticket that leaves on Dec. 31 and takes you back home on Jan. 1 not only goes to Jeongdongjin in Gangwon, but also to Ulsan, Uljin, Ulsan, Pohang, Busan and Haenam.

There is a fierce competition for traffic-jam-free tickets, however, so try calling right away to book a place.

If it is impossible to get a seat for that particular day, tickets are available until January to popular destinations including Jeongdongjin, Uljin and Busan. A one-way train ticket to Jeongdongjin Station, which will get you there in time for the sunrise, starts from 12,000 won ($10.90).

This reporter went on the journey to test it out. Contrary to expectations that the trip would only be crowded on New Year’s Eve, it was hard to find any empty seats on the night of Dec. 20 - a Saturday - from Cheongnyangni Station.

The last train from Seoul left at 11:25 p.m. It took about five hours to get to the Gangwon area.

Jeongdongjin is by far the easiest place to access out of all the sunrise options because there is no need for you to transfer after you arrive at the station. You step outside the station and see the East Sea right away.

Many families, friends and lovers got on the train. Some couples shared earphones to enjoy music and some older crowds of people never let go of their drinks.

The cafe on the train constantly emitted a delicious smell.

The karaoke room on the train was also full of people all night.

One person I met on the train had already gone to Jeongdongjin twice before to see the sunrise.

“Although it is far, it is fun to be on the train, and the fatigue you get from the ride melts away when you encounter the sea and see the sunrise,” said 28-year-old Jang Jeong-hyun.

The train arrived at Jeongdongin Station at 4:28 p.m. I had three more hours to spare until the sunrise, which was scheduled at 7:26 a.m. Some people tried to catch some sleep at the station, some tried to find a place to stay, some went to a cafe with a good view, and some were busy warming up their bodies with heat packs.

Near sunrise, around 500 people gathered on the beach. Although everyone’s eyes were set on the waters over the East Sea, the sun never showed its face behind the thick clouds.

That is one possibility you need to be aware of before packing your bags for an overnight trip to see the sun.

Since there will be so much traffic heading to Jeongdongjin, some hotels only accept guests that do not bring a car.

Until sunrise, nearby cafes and restaurants are full of people. Storefronts also sell food that is very overpriced. Some hot snacks such as a small bowl of fish cakes will cost up to 5,000 won, but they still sell well.

Rooms at nearby hotels and guesthouses, which usually cost up to 50,000 won, have much higher rates - up to three times more. You will be asked to pay a lot more for a room with a view.