Koreans too reliant on property

Koreans too reliant on property 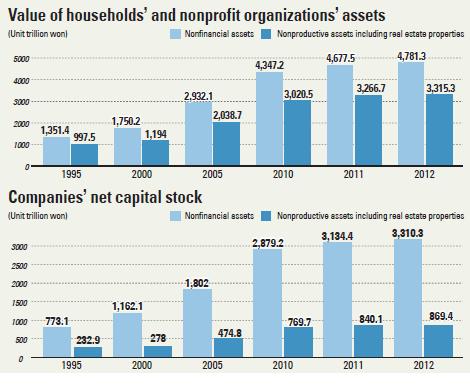 Ms. Kim, who is in her mid-60s, has recently been considering selling her apartment in Songpa District, southeastern Seoul. But when it came time to make a decision, she said she decided to hold on to it for a bit longer.

“My daughters advised me that I should wait until the value starts going up, as there are developments underway and they could possibly help raise the value,” Ms. Kim said.

She and her husband bought the apartment in the early 2000s before he retired. The value surged in the mid-2000s, but has barely moved over the past couple of years, Ms. Kim said, adding that the value is now lower than the price she bought it for.

A joint study by the Bank of Korea and Statistics Korea released Monday showed that Korean households have seen the value of their nonfinancial assets increase at a far slower pace than nonfinancial companies or even the government. The study said that because households are still heavily dependent on real estate for their personal wealth and the market has been stagnant in recent years, the growth assets from nonfinancial properties was slow. 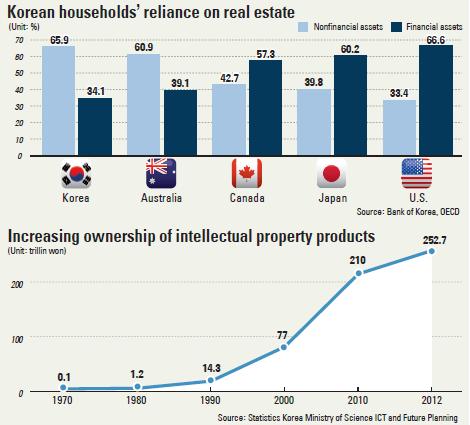 The study also found that as more companies invest in research and development (R&D), the value of intellectual property (IP) products has grown significantly and has become a major contributor to the nation’s economic growth.

The personal nonfinancial assets of households and nonprofit organizations grew an average of 7.7 percent annually between 1995 and 2012, according to the study. The rate is slower than the nation’s overall asset growth of 8.3 percent annually and is far less than the 8.9 percent average growth among nonfinancial companies and 8.5 percent by the government.

“Most of the net capital stock of households and nonprofit organizations are buildings and land and their value has seen a significant deceleration,” said Cho Tae-hyun, an official at the Bank of Korea. “As households’ assets are excessively concentrated in real estate, there is a need to lead them to invest in other alternatives.”

Many Koreans have traditionally built their wealth on the increasing value of real estate, which continues today. Although many people have also increased their financial investments, compared to other advanced economies such as the United States and Japan, Korean households still depend more on property market fluctuations.

Also in 2012, the study showed that IP products have emerged as a major asset. That year, Korea’s IP product assets amounted to over 252.7 trillion won. This is a significant increase compared to the 77 trillion won reported in 2000. Total spending on R&D and software development in Korea is now the sixth-highest in the world.