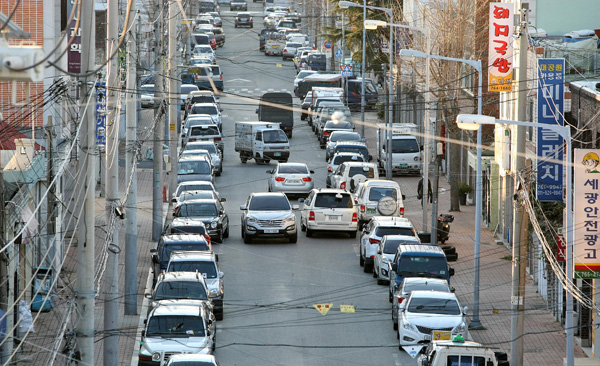 Cars pass by a road in Suseong District, Daegu, on which the center line is barely visible. By Gong Jeong-sik

Earlier this month on a frosty cold day, a welfare center in Buk District, Busan, was bustling with some 40 senior citizens waiting in line to receive a free lunch.

But despite the fact that they were seated indoors, they refused to remove their heavy coats and gloves. With no heating system, the cafeteria was freezing, leaving the elderly there with no other option.

The boiler broke down a year ago, said Gwak Chang-sun, a welfare administration official with the Buk District office, and the welfare center has yet to fix the problem, largely due to a lack of funds. “Welfare costs for the free day care system and the basic pension plan have jumped so drastically that we can’t secure enough tax revenue even for simple repairs,” Gwak said.

Yet, according to a recent field study conducted by the JoongAng Ilbo, the issue facing the office in Buk District is just one of a series of ballooning complaints by local governments over the financing of the welfare policies spearheaded under the Park Geun-hye administration - which include free day care and the basic pension system. 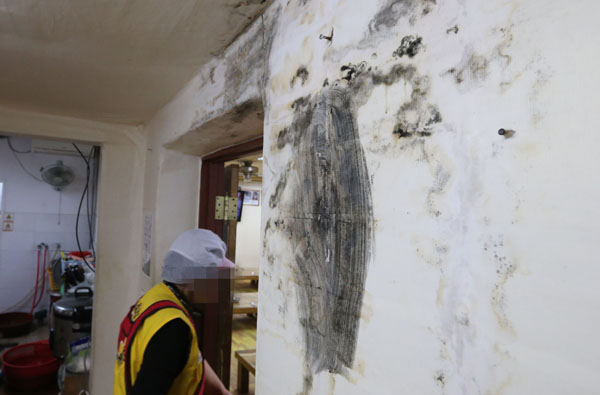 The wall at a welfare center in Buk District, Busan, is covered with mold due to leaking water. By Song Bong-geun

The idea of free-for-all welfare programs can be traced back to the 2011 mayoral and gubernatorial elections. And most office chiefs see them as part of the disastrous fallout from populist policy making that lack funding plans.

The combined debt of the country’s local governments surpassed 100 trillion won ($93.5 billion) for the first time in 2012. And earlier this year, 226 local government chiefs convened to issue a statement declaring that they could not execute basic administrative affairs due to their “deeply troubled financial status,” the result of such welfare projects.

But in attempting to solve those strains, city and district governments were found by the JoongAng Ilbo to have slashed funding in other areas, like safety, which officials argue are more important for public well-being.

In Dong District, Daejeon, for instance, a 140-meter (459-foot) road that is flanked by houses more than 20 years old needs to be widened because fire trucks are unable to pass through, said Kim Seung-jae, an official with the district office.

The office was planning to allocate 552 million won toward construction to widen the 2-meter road by 4 meters next year, but failed to push through with those plans due to financial constraints, Kim added - despite an agreement by the central government to cover half the construction costs. “We’ve scrapped all our self-designed projects for welfare and environmental improvements in residential areas because the budget has all been funneled to the welfare projects led by the central government,” he said. An official from Gangseo District, in western Seoul, who requested anonymity, said that the office received approximately 450 civil complaints this year alone to install more CCTV cameras around the area.

Although Gangseo District only has 430 surveillance devices, compared to other districts in Seoul, which have 1,000 on average, the office doesn’t plan to increase the number next year due to a lack of budget. The official said 57.7 percent of it will go toward other welfare policies.

Daejeon’s Seo District needs approximately 1.8 billion won to light its street lamps next year, but managed to allocate a little more than 1.2 billion won, meaning that some streets will still be dark at night.

Additionally, more than 800 kilometers (497 miles) of road in Suseong District, Daegu, need the traffic lanes repainted - a project that requires 2.25 billion won. So far, the district office has collected less than half.