Kospi’s blah year may be repeated

Kospi’s blah year may be repeated 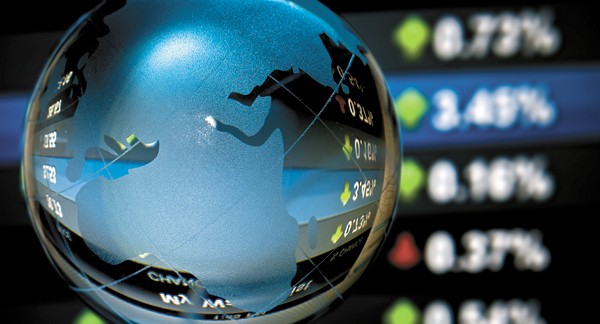 Although the stock market in 2014 was considered as a disappointment, investors worry that 2015 may not be a whole lot better. The first trading day for the Kospi opens at 10 a.m. today. [JoongAng Ilbo]

A year ago, there were high hopes that the benchmark Kospi index could hit 2,500 and easily maintain the 2,300 mark.

But 2014 was a disappointment. The stock market fell 4.76 percent on the final trading day on Tuesday. Throughout the year it was stuck in limbo.

In fact, the Kospi has been stuck for the last three years, but analysts admit that last year was the worst.

Although they say this year may not be much better.

That means that even if an investor bought a stock when the market hit its bottom and then sold it off when hitting its high, the profit pocketed by the investors would be much only 11 percent.

This is a stark contrast to 2010 when the market enjoyed a bullish rally on the back of strong economic growth. That year the economy expanded more than six percent, which was the strongest since the global financial crisis of late 2008.

That year the market fluctuated around 30 percent.

In terms of volume, the daily average shrunk 15.3 percent to 280 million compared to 330 million shares in 2013. It was the second consecutive year that stock transactions fell.

Market experts project that although this year the stock market could see a gradual recovery, it will only be within limits and volatility is not expected.

According to FnGuide, a financial information provider, 13 brokerage firms are projecting the Kospi will stay between 1,840 and 2,188. Since the Kospi closed at 1,915.59 last year, that would signify a gain of 14 percent at best.

KDB Daewoo Securities was the most pessimistic. It projects that the nation’s primary market movement will be limited to between 1,750 and 2,050. Hana Datoo Securities followed with a range between 1,880 and 2,200 while NH Investment & Securities expected the market will stay between 1,870 and 2,190.

The brokerages see a mediocre year ahead because of the deteriorating performances of Korean companies.

“After hitting a high in April 2011, the Kospi has been stuck around 2,000 for the last four years,” said Lee Jun-jae, head of the research center at Korea Investment & Securities. “This is because Korean companies haven’t been able to generate huge profits.

“After recording a combined profit of 85.7 trillion won in 2010, profits have been shrinking in the last four years.”

Lee said that although Korean companies’ profits seem to have grown significantly in the last 10 years, that is actually an illusion created by the two biggest conglomerates in the country, Samsung and Hyundai Motor.

“The biggest issue of Korean companies’ profit this year will be whether Samsung Electronics and the automotive industry will be able to generate as much profits as they have in previous years,” Lee said.

Analysts say interest rates, crude prices, the exchange rate and the aging society are key factors that will affect the stock market this year.

The biggest factor will be how much impact that normalization of interest rate by the U.S. Fed will have on the Korean market.

There are growing expectations that the U.S. Fed will be raising its short-term interest rates in the summer. At the last Federal Open Market Committee meeting held last month, the term “considerable time” was removed, indicating that the Fed is preparing to make changes in its monetary policy soon.

“Since 2008, global stock markets rose not beause of fundamental factors but on how much liquidity was supplied by the central banks,’ said Kim Hak-gyun, head of investment strategy at KDB Daewoo Securities. “The uncertainties will grow over the monetary policy decision by the U.S. Federal Reserve, which just ended quantitative easing [in October.]”

Some analysts speculate that the first move will come around the third quarter and then the Fed will steadily continue to raise interest rates.

“In the case of emerging markets, it will be difficult to expect flexible growth as they will suffer limited demand growth from advanced economies,” said Lee Jae-man, a Hana Dateoo Securities senior analyst. “Furthermore with the U.S. Fed ready to raise the interest rates, markets with weak fundamentals will likely be exposed to volatility risks.”

However, Lee said the impact from the U.S. Fed’s rate hike will be positive for the Korean market.

“Even if the U.S. Fed normalizes the interest rate, the hike will still be subtle and as the Japanese and European central banks will continue loose monetary policies, this will have a positive impact on the Korean market.”

He added that the falling value of the Korean won against the U.S. dollar and low crude prices will also have positive effects on the Korean market.

“The interest rate hike in the U.S. doesn’t always have a negative impact on the stock markets,” said No Geun-hwan, investment strategy team leader at Korea Investment & Securities. “It’s also act an indicator of how well the U.S. economy is doing.”

The decline in oil prices is also expected to affect this year’s stock market particularly in the early months.

The situation could get worse and have a major impact on the global economy and eventually impact local stock markets as well.

“If the crude situation or foreign exchange flows stabilize within the first half of this year, the corporate earnings of Korean companies will improve strongly,” said Eun Sung-min, Meritz Securities analyst.

Kang Hyun-cheol, NH Investment & Securities analyst, sees the aging society as one of the biggest factors in this year’s Kospi performance.

“It seems that Korea reached its peak in terms of a population that has the ability to actively participate in the economy in 2012,” said the analyst. “But it will be this year and in 2016 when the demographic shape of such active participants will be transforming.” Such changes, Kang said, will have a huge change not only on Korea’s economic growth but also on the domestic market.

When there are larger groups of younger people, coffee shops and bakeries thrives. But when there are more senior citizens, such businesses will be threatened.

He said consumption patterns will resemble Japan’s in the 1990s. He said people will become more inclined to buy products that are simpler to operate and that they will have the tendency to save their earnings rather than spending. Also impulse purchases will give way to more planned consumer spending.