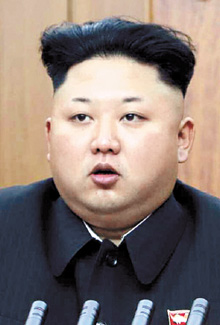 North Korean leader Kim Jong-un made a proposal in a New Year address Thursday for a summit with President Park Geun-hye as the two Koreas celebrate the 70th anniversary of liberation from Japanese colonial rule.

In response, South Korea’s Ministry of Unification gave a positive reply and pointed out that Kim came up with a more detailed stance on inter-Korean relations in his New Year’s Day message compared to last year.

This is the first time Kim has actually mentioned a summit meeting since taking power in December 2011.

The Blue House did not issue an official statement.

“Let’s open up the grand path for an independent unification by having all people join forces this year when the country is celebrating its 70th anniversary of liberation,” the North Korean leader said in a 30-minute address on the state-run Korean Central Television on the morning of the first day of 2015.

“We should boost dialogue, negotiations, exchanges and contacts between North and South Korea so that we could reconnect the severed bonds and lineage and bring a vast change and revolution.”

Kim noted that if the South was willing to improve inter-Korean relations, the North could “resume the adjourned high-level talks and conversations on different issues and there won’t be a reason not to hold a summit meeting according to the mood and environment.” He vowed to “exert every effort to carry forward the conversations and negotiations.”

Unification Minister Ryoo Kihl-jae gave two briefings Thursday after Kim’s speech. “Our government is expecting a dialogue between South and North Korean authorities at the nearest possible time irrespective of the form,” he said. “A practical and open-minded discussion on every issue is necessary including the highest level summit meeting North Korea has proposed.”

The surprise offer from Pyongyang comes three days after the Presidential Committee for Unification Preparation proposed a minister-level meeting this month between the two Koreas. The Seoul government sent a fax message to Kim Yang-gon, director of the North’s United Front Department, offering dialogue on issues of mutual concerns, including reunions of families separated by the 1950-53 Korean War, according to Unification Minister Ryoo.

He hinted that the South could consider lifting its so-called May 24 sanctions on Pyongyang, which were imposed for the sinking of the Cheonan warship in March 2010. Kim’s bid for a summit also follows President Park’s declaration during a trip to the German city of Dresden in March last year in which she expanded her vision for unification. In a 2014 New Year’s address, Park described unification of the peninsula as a potential “jackpot.”

The 31-year-old North Korean leader emphasized that the ultimate goal of his proposal was unification.

“Even though the world has advanced this far and the times have immensely changed, that our people have yet to realize unification and suffer the pains of division is a pitiful affair that everyone knows and is indignant about,” he said. “The tragedy of division of the people over generations is no longer to be tolerated nor can it be permitted.”

At the same time, Kim pinned the blame for the poor inter-Korean relations on Seoul.

“Last year we came up with crucial proposals for improved North-South relations and unification and made sincere efforts toward their realization,” he said. “But we could not enjoy the deserved fruits due to schemes by the anti-unification factions in and outside of the country, and relations have even been running on a worsening path.”

Should the two leaders meet this year, the most probable venue would be Russia in May as the Russian government has invited both to celebrate its 70th anniversary of the end of World War II. North Korea and Russia are already in the process of planning a joint commemorative event, according to the North. The South Korean government has yet to decide whether to accept the invitation.

Both the ruling and main opposition parties welcomed the North’s move.

“[Kim’s speech] is positive in that it signals he doesn’t mind an inter-Korean summit,” said Kim Young-woo, chief spokesman for the governing Saenuri Party. “We wish to find a turning point that will fan the embers of inter-Korean talks and initiate exchanges between the two sides, thus building mutual trust this year, the 70th anniversary of liberation and the division of Korea.”

Kim Sung-sun, the spokesman for the New Politics Alliance for Democracy (NPAD), said, “We are particularly paying attention to the fact that [the North] has opened the potential for a summit.”

He continued: “The North Korean leader’s remarks are hoped to serve as a breakthrough in stalled inter-Korean relations.”

Experts say it’s too early to be optimistic about a summit.

“It entails a lot of conditions Kim mentioned [in the speech],” said former Unification Minister Kang In-duk, “ranging from halting of military drills, a United States’ policy change, lifting of May 24 sanctions and resumption of tours to Mount Kumgang.”