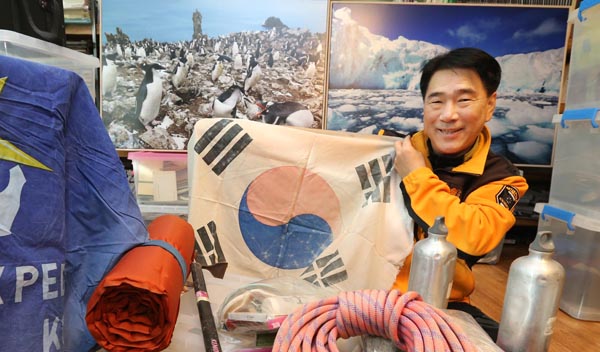 Lee Dong-hwa shows off the Korean national flag that he has preserved since his first visit to the South Pole in 1985. By Song Bong-geun

Thirty years ago, Lee Dong-hwa became the first Korean to explore the South Pole. Since then, he has kept all the materials he used at the time, including the journals he filled while traversing the far reaches of the globe.

He recalled one anecdote about how 19 days after landing in the South Pole, he saw a mosquito flying around base camp, a rare occurrence in Antarctica, the world’s coldest continent. Out of curiosity, Lee caught the mosquito and put it in a container, which he has preserved until now.

After his first visit to Antarctica in 1985, he returned two years later, this time to help build King Sejong Station for the Korea Antarctic Research Program, which was completed in 1988. Now he makes trips annually to manage the Jang Bogo Antarctic Research Station, Korea’s second research base, which was finished in February 2014.

The materials he collected and the journals he wrote while at the South Pole totals 1,000 today. And Lee has kept all of them for 29 years. He moves frequently - 16 times so far - but on each new chapter, he places his treasures in 50 storage boxes and goes on as always.

Some possessions need to be kept in an open space to better preserve them.

This month, he plans to donate his collection to the National Maritime Museum in Busan, which is scheduled to host a special exhibition this year marking the 30th anniversary of the nation’s advancement into Antarctica.

While at the South Pole, Lee dug up more than 20 plant fossils, breaking the thick ice to get to them. Those fossils carry the secrets to the beginning of the universe, he explains proudly.

He has also preserved more than 1,000 photographs, weather-proof clothing from his fellow expedition members and even a spoon he used there.

In a diary he wrote on his first day at the South Pole, Lee wrote: “It’s 2 p.m. on Nov. 16, 1985. Will there be a moment any more touching than today? This is the most impressive time of my life. As a Korean, this is the first step on the South Pole.”

Lee also treasures the Korean national flag that the expedition erected in King Sejong Station three decades ago. To secure the flag, he returned to the station 30 minutes after leaving, thinking that he had to bring it with him.

He stressed the importance of spreading awareness about the isolated continent, using Japan as an example, where the government stirs public interest in the South Pole by broadcasting a program about it as part of the country’s New Year’s programming.

“We need to turn our eyes to the South Pole for the future,” Lee said, “where resources abound.”