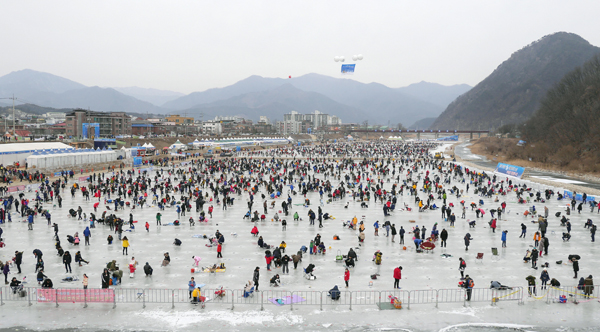 The sixth Jarasum Singsing Winter Festival in Gapyeong, Gyeonggi, kicked off on Friday, drawing 20,000 people on the first day. The ice-fishing festival lasts until Feb. 1.[NEWSIS]

Ice fishing season officially kicked off in Korea on Friday with the opening of the sixth Jarasum Singsing Winter Festival in Gapyeong, Gyeonggi, boasting 100,000 raised trout.

The monthlong event, which runs until Feb. 1, is held in Gapyeong’s river areas and draws about a million people annually.

Participants can eat the trout they catch on site, which can be served raw, grilled or in a rice soup.

Kim Min-kyung, who visited the festival with her friend on a company holiday, caught two trout this week.

“We just had trout sashimi, and it was delicious,” she said. “They were playing music while we were fishing. I feel like I’m at a ski resort.”

At the venue, the participants can register their stories. Music is played via the Singsing radio station.

“We have aimed to attract a million people for three consecutive years and make it the biggest winter festival in the metropolitan area,” said Kim Seong-gi, the head of Gapyeong County. “Divers check the status of the ice, and we will disclose ice thickness and the presence of cracks each day.”

Seventy tons of trout were unpacked under the ice for the event. The county increased its provisions by 10 tons of trout compared to last year, reflecting the festival’s popularity. The fishing area can accommodate 25,000 people and is 7.6 times lager than a soccer field.

Lake trout live in fresh water environments and are considered haute cuisine. The species has gradually become harder to catch as its habitats have dwindled.

Visitors to the festival can enjoy a range of activities, including sledding and ice skating.

Admission is 13,000 won ($12) per adult, while entrance is free for preschool-age children and under.

Ice fishing is a representative leisure activity in Korea, with trout and smelt proving to be the most popular species.