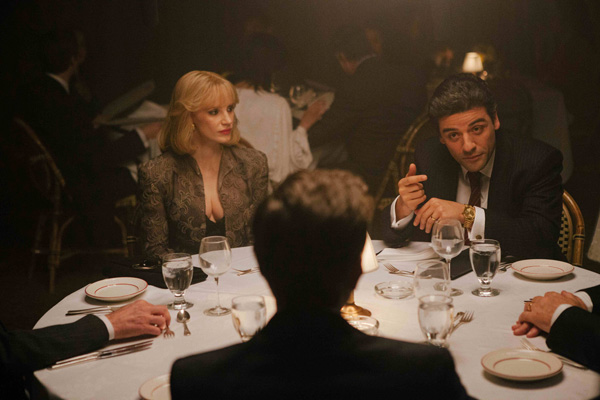 Jessica Chastain, left, and Oscar Isaac appear in a scene from “A Most Violent Year” directed by J. C. Chandor. [AP/NEWSIS]

From the scripts he was getting to the very entryway of his daughter’s elementary school, it seemed he couldn’t escape guns and gratuitous gore.

His latest feature, “A Most Violent Year,” might sound like just another gun-happy action pic, but the slow-burning drama was actually born out of a staunch reluctance to continue presenting violence as entertainment. And it might never have happened if Chandor hadn’t needed a job.

“Now it seems quaint to say it, but it wasn’t very long ago when I didn’t know if I was ever going to make a movie again,” said Chandor, 41, who started panicking while editing his second film, “All Is Lost” (his first film was “Margin Call” in 2011).

“I was like, ‘I just made a movie about one guy on a boat.’ I didn’t know how it was going to turn out. I didn’t know if I was ever going to work again, frankly.”

When he started seeking out potential next projects, he was surprised that out of the hundreds of scripts and books and pitches he was getting, that “90 percent of those were grotesquely violent,” he said.

He was faced with a choice. On the one hand, he knew he had to work. Perhaps outrageous savagery was the only way to ensure a third project, even if he’d have to spend his days “thinking up seven ways to chop a guy’s head off” to support his family.

On the other hand, though, he resented the fact that it could be used for entertainment, especially considering what was going on in his own backyard.

Around the same time as his quest for another project, he saw how a single act of horrific violence could change an entire town and country. Sandy Hook Elementary school in Connecticut is just two towns from where Chandor lives with his young family. When he went to drop his daughter off at her first grade class days after the 2012 massacre, he couldn’t help but be struck by the armed guard standing at the entrance and what that might mean.

“This idea of escalation started to build,” said Chandor. “That’s the most damaging effect of violence. ... The real, greater societal damage is the ripples.”

From there, he began burying his head in crime statistics and came across an anomaly: The year 1981 was a tipping point in New York. Lawlessness reached an all-time high and then fell in the years after.

Then, Chandor realized that he too could choose both.

In “A Most Violent Year,” he synthesizes the structure of the classic gangster film with an idea of a character piece that he’d been toying with for years, set around a small family business.

Starring Oscar Isaac and Jessica Chastain, “A Most Violent Year,” centers on a husband and wife and their growing heating oil company in that storied year. Though they’re on the outskirts of the city’s immediate violence, it still manages to seep into their lives.

To recreate the time, Chandor and cinematographer Bradford Young took inspiration from the photographs of Jamel Shabazz, a New York photographer from the period who focused on African Americans and Latinos living in the city.

Both remember experiencing the city as children. For Chandor, who grew up in New Jersey and often took trips in to the city to see shows with his mom or visit his dad, who worked in the World Trade Center, it was exciting and terrifying. Young was a bit more removed, having grown up in Louisville, Kentucky.

“Visually it raises the stakes,” explained Young, who aimed to create an atmosphere of eerie isolation throughout the film. “You assume there’s always someone tucked in the corner trying to rob you.”

Chandor’s characters are living on the edge of this world.

“These are people isolating themselves from the city. They’re moving to the ‘burbs. They’re driving around in big German cars. Their office is like a walled compound with that gate. They’re trying to isolate themselves with the violence of the day, but you can only do that so long if you actually want to live in a viable society where you want to do business,” said Chandor.