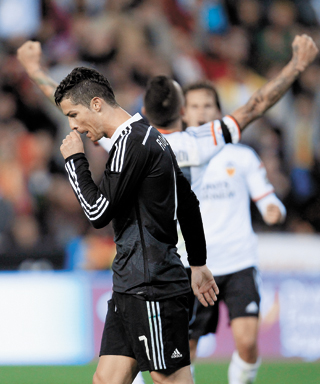 Real Madrid’s Cristiano Ronaldo reacts at the end of a La Liga match against Valencia at Mestalla Stadium in Valencia, Spain, on Sunday.[AP/NEWSIS]

Valencia ended Real Madrid’s 22-game winning streak by fighting back for a 2-1 victory on Sunday, but the blow was softened by Barcelona also stumbling to a 1-0 loss at Real Sociedad in the Spanish league.

Cristiano Ronaldo extended his stunning tally to 26 league goals in the 14th minute at Mestalla Stadium when he stroked in a penalty kick following Alvaro Negredo’s handball.

Valencia, however, rallied through a goal by Antonio Barragan in the 52nd defender Nicolas Otamendi fended off Sergio Ramos to head home the 65th-minute winner.

Barcelona stepped onto the Anoeta pitch knowing a win would make it the provisional leader, but Coach Luis Enrique chose a starting 11 without Lionel Messi and Neymar.

Barcelona went behind when Jordi Alba scored an own goal two minutes in and not even the two stars coming on as second-half substitutes could spark the comeback.

Madrid has a game in hand and leads Barcelona and defending champion Atletico Madrid by one point.

Madrid had not lost or drawn a game in any competition since a 2-1 defeat to Atletico on Sept. 13, setting a Spanish record for consecutive wins.

Carlo Ancelotti’s team must recover quickly for a second tough outing at Atletico on Wednesday in the Copa del Rey.

“You can’t take anything away from Valencia,’’ Ramos said. “It stings to lose the three points and see our run end, but the league is long. We weren’t singing victory before nor are we going to blow the league now. They played their style, they knew how to gather more players in the midfield, and they took the points.’’

Valencia’s first win in six visits by Madrid lifted it into fourth place, the league’s last Champions League spot that the club has set as its goal for the season.

Rayo Vallecano also came from behind for a 2-1 victory at crosstown rival Getafe from goals by Jozabed Sanchez and Raul Baena.

Eibar, meanwhile, continued its impressive topflight debut by holding on to win 2-1 at Espanyol after goals by Manu del Moral and Eneko Boveda to move into eighth place.

Manager Nuno Espirito Santo opted to load Valencia’s midfield with five players - including a debut for new arrival Enzo Perez - and play with a three-man defense.

That set up a fascinating matchup between Gareth Bale and Valencia defender Lucas Orban. The speedy Wales winger provided Madrid’s most dangerous threat early on before the Argentine got the better of him in the second half.

Valencia’s vigorous push in the opening minutes was undone when Negredo used his arm to block a headed pass by Bale, letting Ronaldo step up and slot the spot kick inside the post.

The first half then went from intense to testy, and the referee booked seven players before Valencia midfielder Andre Gomes mustered the host’s only scoring opportunity before halftime.

Gomes fired a long strike that deflected off a Madrid player before hitting the post.

Valencia pushed for an equalizer after the restart and found it when Orban this time won the ball from Bale, leading to substitute Jose Gaya finding Barragan to unleash a long shot that hit Pepe to leave Iker Casillas helpless to stop it from reaching his net.

Barcelona’s loss will likely fuel criticism of first-year coach, Luis Enrique, for his constant shuffling of his starting 11.

Luis Enrique justified his decision by saying “I thought it was best not to risk with Messi and Neymar after their long trip’’ back from Argentina and Brazil during the winter break.

David Moyes’ Sociedad did little more than provoke two quick corner kicks, the second of which Alba headed into his net for his second own goal of the season.

Only with Messi and Neymar coming on after halftime did Barcelona turn its overwhelming possession into waves of chances. Luis Suarez had the best in the final five minutes, but goalkeeper Geronimo Rulli saved both.

“The ball didn’t want to go in,’’ said Xavi Hernandez. “We missed a chance to have gone ahead, but we have to keep going forward.’’