More subscribers are signing on to thrift phones

More subscribers are signing on to thrift phones 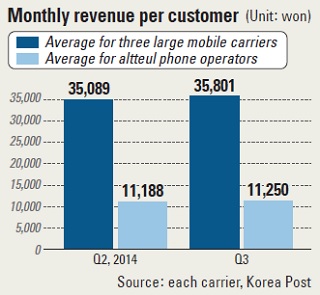 Korea Post, one of the largest networks to subscribe to the so-called altteul phones, said on Monday that it saw its customer numbers grow over the last year.

As of the end of December, the number of altteul phone users rose to 174,000 - ten times more than at program’s start in October 2013.

According to data provided by the Korea Post and Korea’s large mobile carriers, the average revenue per user (ARPU) for altteul phone operators was 31.4 percent of the same figure for the three private-sector telecom giants. The APRU is an average sales amount each mobile carrier earns from each customer monthly.

The post office said this means that users of altteul phones are saving total household telecom bills of 50 billion won annually when compared to regular households that subscribe to the three private-sector giants.

According to a study by Statistics Korea, Korean households spent an average of 159,400 won per month on telecom bills in the first quarter of last year, up 5.5 percent compared to the same period in 2013.

This was about 6 percent of the households’ total monthly spending of 2.65 million won.

More than 80 percent of altteul phone users are aged 40 and up. They mostly use feature phones and 3G smartphones.

Some of them are teen-only plans using LTE-enabled smartphones with a basic monthly fee of 22,000 won, which offers 750 megabytes and an automatic shutting of the data connection after exceeding that amount. That’s a lot cheaper than the same plan offered for 34,000 won by the three mobile carriers.