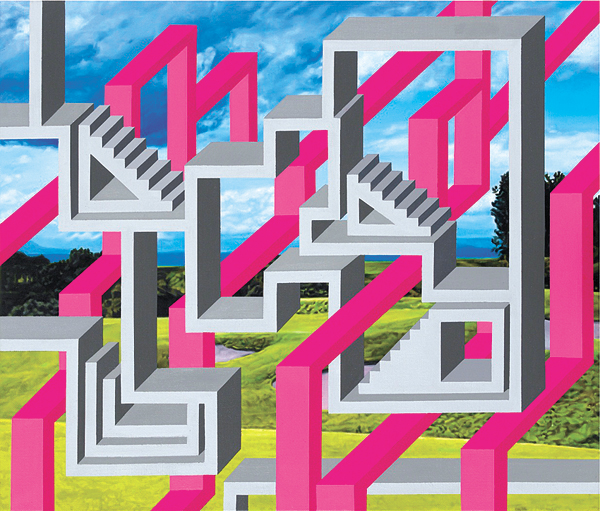 To Jan. 31: Hong Kyoung Tack, one of the most internationally famous Korean painters, is best known for his works that depict pens, books and other common objects in vivid colors.

In this exhibit, he shows new landscape paintings of tranquil fields seen through gray grids that look like concrete structures. In some of the pieces, the grid is so thick that the landscape painted over it is barely visible.

The artist explained that humans see nature through certain frames of their society. And ironically, the green fields that he painted over the gray grid are not pure nature, either - they are golf courses.

Go to Nambu Bus Terminal station, line No. 3, exit No.5 and walk for 10 minutes. 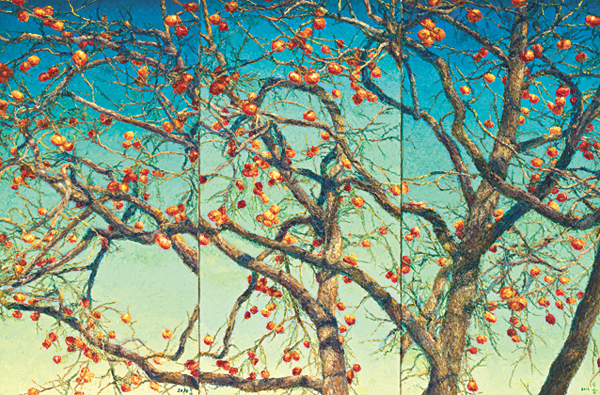 To Feb. 15: This exhibition features 66 paintings by 36 modern Korean artists who are popular among local art collectors. The works on display, which belong to the museum’s collection, include the famous “Bull” by Lee Jung-seop (1916-56). “Apple Trees” by Lee Dai-won (1921-2005), and “Persimmons” by Oh Chi-gyun.

Admission is 9,000 won for adults and also includes admission to Seokpajeong, a hanok (traditional Korean house) behind the museum that was once the summer residence of King Gojong’s father. 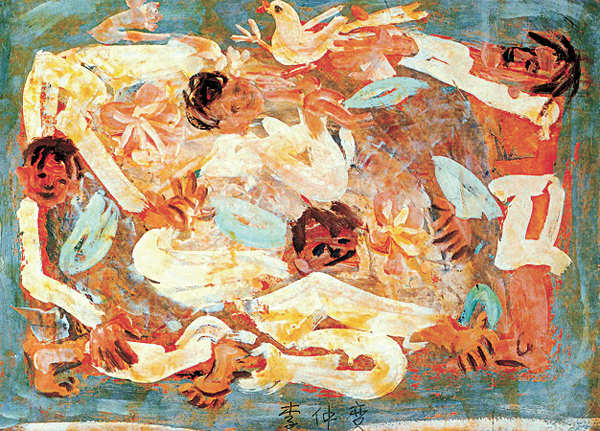 To Feb. 22: The retrospective of Lee Jung-seop (1916-56), one of the most beloved modern painters among Koreans, focuses on his love and longing for his family.

The show consists of 70 of his oil paintings, drawings, the postcards and letters to his wife and sons, which he added his own drawings or he filled utterly with paintings.

During the Korean War (1950-53), Lee sent his wife, who was Japanese, and his two sons to Japan to escape their impoverished life in Korea. Lee died in 1956 and was never reunited with his family.

The exhibit includes 20 letters with drawing that have never been displayed before and three paintings Lee created on the metal foil found inside a pack of cigarettes, which are from the Museum of Modern Art collection in New York.

To Jan. 25: In his latest solo show, Lee Kwang-ho displays his latest landscape paintings that depict bushes in the most desolate areas on Jeju Island during the winter.

The 47-year-old’s unique brush strokes and his technique of scratching the canvas with a needle make the bushes appear raised, as if the viewer could touch them.

Feb. 8: This solo show displays the art work of Lee Lee-nam, 45, one of the most popular local artists.

He has been in the public eye for the past decade because of his videos in which he creates animations of paintings by old masters of the West and East, occasionally adding in his own sense of humor.

In the new show, the artist is presenting installations that differ from his previous style, as well as upgraded versions of his older animated digital paintings.

Among the newer pieces is “Reborn Light,” which the exhibition is named after. In the work, a TV monitor shows a man’s head repeatedly sinking into and emerging from water while he opens and closes his eyes.

Go to Gyeongbokgung Station, line No. 3, exit 3, take bus No. 1711 and get off at the Lotte Apartment stop. Walk for five minutes.

FROM THE PHILLIPS COLLECTION

To March 12: This show details Western art from the early 19th to mid-20th century, represented by works from the Phillips Collection based in Washington, D.C. The exhibition’s 85 works by 68 artists are from the American museum.

A similar show called “Picasso and Great Artists” attracted 140,000 viewers in three months when it was held at Daejeon Museum of Art last summer.

To Feb. 22: The exhibition organized by the MMCA in collaboration with the Bauhaus Dessau Foundation sheds new light on the German art education institution’s experiments with performance and staging, which is less renowned than its legacy in architecture and commercial design.

The works on display include costumes for “Triadisches Ballett (Triadic Ballet),” developed by German Bauhaus painter and choreographer Oskar Schlemmer (1888-1943).