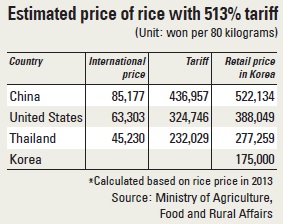 Five countries that export rice to Korea have submitted complaints to the World Trade Organization (WTO) that the Korean government’s 513 percent tariff, which took effect Jan. 1, is too high.

The Ministry of Agriculture, Food and Rural Affairs said Tuesday that the United States, China, Australia, Thailand and Vietnam submitted objections to the WTO at the end of 2014 because the tax on rice is excessively high compared to other countries.

The nations said that the tariff calculations done by the Korean government using one of two methods allowed by the WTO may be inaccurate.

It is reported that the United States and China have asked that the tariff be cut in half to about 200 percent or 250 percent.

The government submitted its proposal to the WTO in September in exchange for opening up its rice market.

Since the Uruguay Round took effect in 1995, opening each WTO member’s agricultural market, Korea was given a two-decade waiver under the condition that it would import a set amount of rice each year from fellow WTO members - including the five countries that objected to the new tax proposal.

Before Korea decided to open up the domestic rice market, it had to meet its WTO quota of 408,700 tons of rice imported per year, and that amount was increased by the WTO on an annual basis.

In July, the government decided it would open the rice market on Jan. 1. The decision not to ask the WTO for another waiver and to open the market instead outraged domestic rice farmers and prompted the government to prepare a proposal - a 513 percent tariff.

In addition, the Korean government also proposed that a special safeguard tariff would be added in case the price of rice fluctuates abruptly.

“The five countries did not specify which part of our calculation they think may be inaccurate,” said Lee Jeong-seok, an official at the Agricultural Product Trade Department at the Agriculture Ministry.

“The Korean government will make sure that those countries accept our original proposal through bilateral negotiations, regardless of the time it takes to persuade them. Our calculations were reasonable because we strictly followed WTO guidelines.”

Although the Korean government has to start negotiations with the five countries, the 513 percent tariff will still be applied in the market.

The Ministry of Trade, Industry and Energy also said there is little possibility of lowering the tariff, and that Korea will protect agricultural products in all of its trade agreements.

Market analysts have said that with a 513 percent tariff, the opening of the rice market will not affect local farmers.

According to a survey published in September by the Korea Rural Economic Institute (KREI), Korean consumers preferred locally produced rice to American or Chinese variations, based on quality and price.

“Rice produced abroad is expected to cost more than twice as much as Korean-made rice, mainly due to the size of the tariff,” the KREI report said.

“This will curb additional rice imports beyond the obligatory import quota.”

Japan and Taiwan have also both previously dealt with similar rice tariff issues, but they have managed to persuade the WTO members to accept the high import tax.

Both countries have delayed opening their rice markets but eventually decided to do so rather than endure the import quota because it would be more beneficial since the quota rises over time.

Japan took 23 months and Taiwan took 57 months to push through the high taxes due to opposition from just a few countries.