Car companies want 2015 to be the year of the hybrid

Car companies want 2015 to be the year of the hybrid 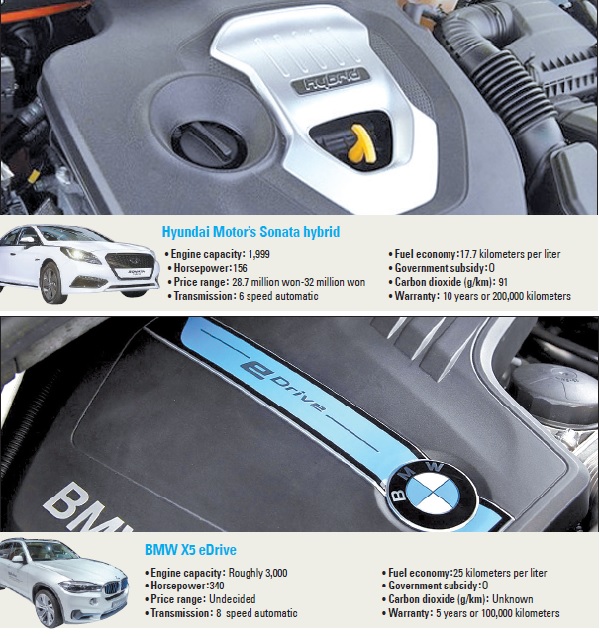 Office worker Park Woo-ram, 35, recently ditched his Kia Sorento SUV, which he has been driving for the last six years, for a Toyota Prius hybrid.

Before going eco-friendly with the hybrid, he was considering buying another diesel car like his Sorento.

Although gas prices are falling, Park decided it would be more economical in the long run to switch to a hybrid rather than staying committed to a fossil fuel-powered car.

“The Sorento gave decent fuel efficiency when I drove it on the highway,” Park said. “But since most of the time I drive around Gangnam, which is always congested with heavy traffic, I thought it was time for me to buy a hybrid. 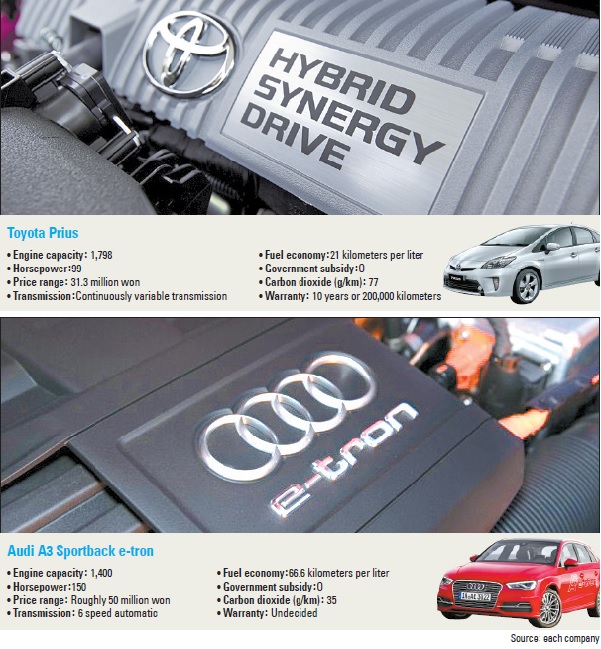 “I was a bit hesitant because oil prices are falling, but the Prius was being offered at a reasonable price and the spacious interior seemed important since my wife and I are expecting a child in six months.”

Less than a week into the new year, the local automotive industry is revving up to promote hybrids, particularly to entice young customers who are hesitant because of falling prices and high maintenance costs.

Toyota was the first to start aggressively marketing hybrid vehicles by offering eye-popping options. The Japanese automaker on Monday announced that it will be extending its warranty on hybrid batteries from five years or 80,000 kilometers (49,709 miles) to 10 years or 200,000 kilometers.

The offer is applied to all Lexus vehicles including the Lexus CT 200h hatchback, ES 300h and NX 300h and Toyota Prius.

This extended warranty is only for consumers here in Korea.

Of Toyota’s total lineup, hybrid models are the biggest sellers in Korea. Toyota Korea sold a total of 6,400 units last year and 80 percent, or 5,100 units, were hybrids.

The nation’s leading automaker Hyundai Motor, which introduced a new Sonata hybrid on Dec. 16, will be unveiling its Sonata plug-in hybrid sedan for the first time during the Detroit Motor Show, which will be kicking off on Jan. 12.

A plug-in is a hybrid with a battery that can be charged by being plugged in at home or at a charging station.

“The competition in the environmentally friendly car market is expected to get tougher this year,” said a Hyundai Motor spokesman. “We are planning to expand our hybrid models, including plug-ins.”

Hyundai Motor is hoping to sell 18,000 hybrid vehicles this year in the Korean market alone.

As of Monday, roughly 1,400 units of the new Sonata hybrid released last month have been sold, according to the Korean automaker.

“Our marketing strategy of introducing Sonata as a high performance hybrid car has worked out well,” said the spokesman.

The automaker plans to sell the new hybrid sedan in the United States in the first half of the year. It projects a sale of 37,000 units in the global market this year. As a promotional tool, it is offering a 10 year or 200,000 kilometers warranty on the vehicle’s parts.

Other automakers are not sitting on the sidelines.

Audi plans to introduce the plug-in hybrid A3 Sportback e-tron in the second half of the year. According to the German automaker, the hybrid can drive up to 240 kilometers on a full charge.

BMW is planning to introduce its own hybrid vehicle, the X5 eDrive, to Korean consumers this year. Like Audi’s, this is also a SUV that has plug-in hybrid technology.

Hybrid cars have been in the Korean market since 2009 after Prius made its official debut in Korea. That same year Hyundai Motor introduced its first hybrid vehicle, the Avante LPi hybrid.

However, it didn’t really click in Korea because of its expensive sticker price and high maintenance costs. A gasoline engine Camry retails at 33.9 million won while a Camry hybrid is sold for 26 percent higher, or 43 million won. Of course, the latter has better fuel efficiency. The hybrid model’s fuel efficiency is 16.4 kilometers per liter (37.6 miles per gallon), while the gasoline version’s is 11.5 kilometer per liter.

Additionally the cost of fixing hybrids is generally higher. In the case of the Camry hybrid, the battery alone costs 4.34 million won to replace.

But recently the market has seen some changes. The prices of hybrids have been falling, which is further fueled by government subsidies. The Korean government is offering 1 million won subsidies starting this year for hybrid vehicles that emit less than 97 grams (3.4 ounces) of carbon dioxide for every 1 kilometer they travel. Additionally there are several tax cuts that could lower the price of a hybrid vehicle as much as 1.4 million won.