E-cigarettes seen as an alternative

E-cigarettes seen as an alternative 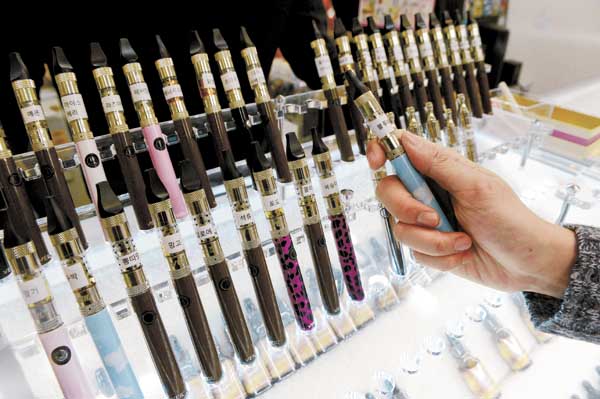 A customer looks at electronic cigarettes on Monday at a shop in Gwanak District, Seoul. Many smokers have sought cheaper alternatives following this year’s cigarette price increase. [NEWSIS]

Lee Jang-ryeol, a 34-year-old smoker, recently bought an electronic cigarette in an effort to save money.

The battery-powered vaporizer heats up nicotine and other liquid elements to produce a smoking-like effect for users.

Moreover, he liked the vendor’s explanation that the gas emitted is only a harmless water vapor, rather than the mixture of unhealthy chemicals found in typical cigarettes.

“I felt guilty because of my 5-year-old and 2-year-old daughters, but now I feel relieved that it doesn’t smell and isn’t harmful to my children,” said Lee, who resides in Seongbuk District, northern Seoul.

But despite its apparent benefits, e-cigarette smokers like Lee still won’t be able to use the contraption in offices, bars or other non-smoking areas, and vendors who advertise that electronic cigarettes are harmless will face penalties.

Research by Kongju National University’s Industry-University Cooperation Foundation, for which it studied 30 electronic cigarettes, found that the gases produced by all of them contained toxic ingredients such as formaldehyde and acetaldehyde.

The research team also discovered that the gases had, on average, more than twice the nicotine content of a normal cigarette.

“Depending on smoking habits, smokers may intake more nicotine with e-cigarettes than a typical cigarette, which could be more harmful,” said Ryu Geun-hyeok, the ministry’s bureau chief of health policy.

Some of the 30 products also had hormone disruptors such as diethyl phthalate or diethylhexyl phthalate, which are not present in typical cigarettes.

The National Institute of Health Science of Japan released a similar study last year that showed that heating the nicotine liquid used in an e-cigarette may produce up to 10 times the formaldehyde in a typical cigarette.

The ministry fears that with the newly implemented cigarette price hike, sales of electronic cigarettes will only continue to increase.

As a countermeasure it is currently planning to heighten its monitoring of e-cigarettes, including sales to teenagers, exaggerated advertisements and their use in nonsmoking areas.

Those who use e-cigarettes in nonsmoking zones could be fined up to 100,000 won and vendors who advertise that electronic cigarettes are harmless or may be helpful in quitting smoking may face penalties of up to 10 million won.

According to the Korea Customs Service, $4.75 million worth of goods related to electronic cigarettes were imported between September - when the government announced that it would raise the cost of cigarettes - to November, which is more than seven times the amount in the same period a year earlier.

E-cigarette sales on the online shopping website G-Market in November were six times greater than in January last year, and December sales were 12 times greater.