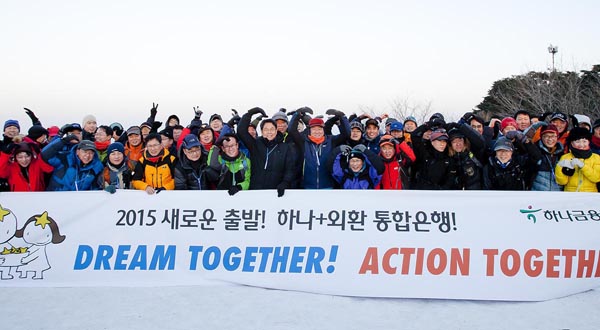 Hana Bank and Korea Exchange Bank executives and employees reaffirm their goal of merging into a single bank by climbing Mount Bukhan in Seoul on Jan. 1. Provided by the company

Conflict between Hana Financial Group and the labor union of Korea Exchange Bank (KEB) is heating up over converting contract workers to regular employees.

This is in stark contrast to the upbeat mood exuded by the two institutions on Jan. 1, when Hana Bank President Kim Byoung-ho and KEB President Kim Han-jo climbed Mount Bukhan in Seoul with executives and employees in a symbolic reaffirmation of their goal of a successful early merger.

The two bank chiefs and employees even posed for a picture under a sign that read: “Dream together, action together.”

The KEB labor union claims Hana Financial Group is dragging its feet on its promise to make some of the 3,400 irregular workers at Hana Bank and KEB regular workers, originally expected to be completed earlier last year and then postponed to December.

But with negotiations stalled, the union says, Hana is trying to further delay the issue.

The union argues the conversion should be made by the end of January, while Hana says it plans to make the change a month after the merger. And while the labor union contends all irregular workers should be elevated to regular status, the financial group disagrees.

Other than the timing of the workers’ conversion, the two sides have been unable to agree on wages for the new regular workers and a system of promotions.

The union demands that the converted workers receive the same wages as current regular workers, while the group wants to maintain the status quo.

The KEB union says different salaries and promotion systems would be unfair and create discrimination.

The conflict comes at a time when Hana Financial Group has been trying to push for an early merger with KEB as the financial industry struggles with shrinking profitability caused by the government’s stimulus campaign that resulted in the Bank of Korea cutting the key interest rate to its lowest level ever.

With the country’s economic growth decelerating, an additional rate cut is expected as early as the first quarter of 2015.

When it first bought the majority share of KEB in 2012, Hana Financial Group promised the bank’s management would remain independent for five years.

But deterioration in the banking environment prompted Hana to push for an earlier merger to maximize competitiveness and solidify its position in the domestic financial market.

The merger was first mentioned by Hana Financial Group Chairman Kim Jung-tai during a press conference in July.

Citing the successful merger of the two banks overseas and how it reduced costs while improving competitiveness, Kim hinted at an early merger in Korea.

That sparked a protest by KEB union employees, who asked Kim to stick to his promise.

Hana is targeting a merger with KEB by March.