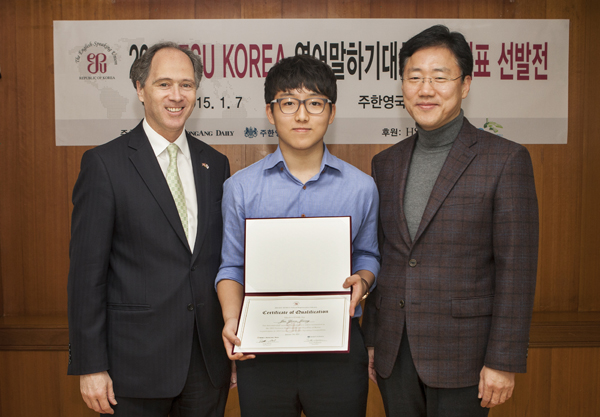 Jung Jae-yoon, center, poses with British Ambassador Scott Wightman and Ryu Kwon-ha, the executive editor of the Korea JoongAng Daily, on Wednesday at the British Embassy in Seoul. By Park Sang-moon

Jung Jae-yoon, who attends Eton College in Britain, was selected Wednesday as Korea’s contender for the 34th English-Speaking Union (ESU) Public Speaking Competition to be held in May in London.

Jung will compete against about 80 contestants from roughly 50 countries during the five-day program, with the hope of becoming the world’s most eloquent non-native English-speaker.

Jointly hosted by the Korea JoongAng Daily and the British Embassy in Seoul, the competition is a well-known English-speaking contest sponsored by Britain’s Queen Elizabeth.

Other sponsors include the Hong Kong and Shanghai Banking Corporation (HSBC) and Incheon Global Campus. ESU Korea and Edubase are in charge of management.

Competitions are held twice a year in three divisions: elementary school, middle school and high school. The two winners in the high school division compete against each other each year to be the contender in London.

Jung won the grand prize in the high school division of the 8th ESU Korea Public Speaking Competition late last year and faced off with Suh Jung-woo on Wednesday.

“I’m elated,” said Jung after being named one of Korea’s best English speakers. “I mostly focused on research while preparing for this contest because when it comes to speeches, I think content matters the most.”

Jung continued that he would study “other professional speakers” for the upcoming international competition in London.

At Wednesday’s final contest, held at the British Embassy in Seoul, the teens each presented a prepared five-minute speech on the topic, “Culture is not a luxury, but a necessity.”

Both were then given a choice of topics for extemporaneous speeches, at three minutes each. Fifteen minutes of preparation in a private room was afforded to each finalist.

Jung chose the topic “Is life experience more important than formal education?” while Suh chose “Is technology improving or destroying the world?”

In a pronounced British accent, Jung said in his impromptu speech, “There are two reasons why formal education cannot overcome life experience: Because life allows failure and creativity.”

Jung continued: “Formal education is like a giant factory. It produces the same kids and same knowledge. Relying on formal education means you’re being a book. Write your own books. We choose our own future. Books or pens: It’s your choice.”

Applications for the 9th ESU Korea Public Speaking Competition will be accepted until Jan. 23.