Korean artist Song Hojun’s interactive projection “How Are You Doing?” (2014) Provided by the museum

Those who pass the entrance of an exhibition room on the third floor of Artsonje Center in central Seoul will face a life-size image of a Korean man or woman standing upright, projected onto a wall.

Triggered by a sensor, the man or woman will make a so-called 90-degree bow, shouting “Annyeong hasimnikka!” loudly. The phrase translates to “How are you doing?” 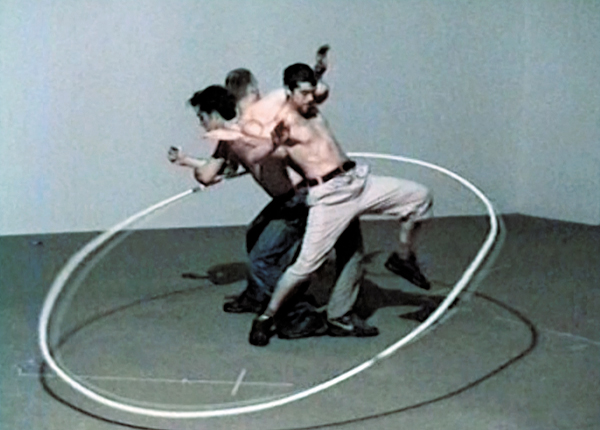 To Koreans, that image is not unfamiliar, as men, including K-pop stars on television, greet their seniors this way, exaggerating their respect and delight at seeing them.

“That kind of greeting originates from the masculine Korean culture of the military and boys’ schools,” said Song Hojun, the artist who created the interactive projection “How Are You Doing?” 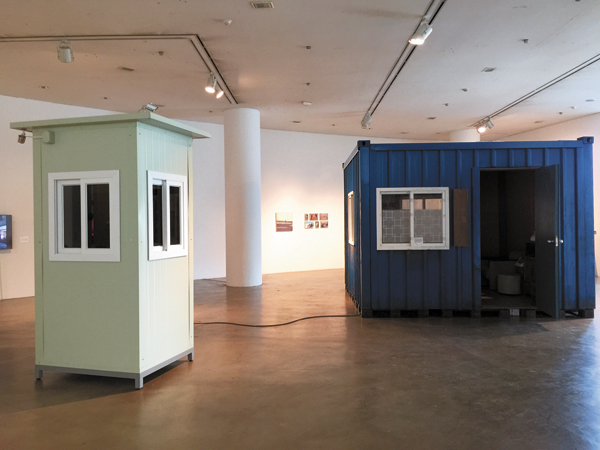 Installations by Israeli artist Tsahi Hacmon (container on the left) Korean artist Park Jae-young’s “Mr. P’s Agitpunkt” are part of the exhibition “A Room of His Own: Masculinities in Korea and the Middle East” at Artsonje Center in central Seoul.Provided by the museum

“Now, it has spread to women, like girl group members on TV,” he added.

Song is an artist who is famous for a project in which he successfully launched a satellite without support from the state’s science authorities.

The 90-degree bow is common in Korea and is generally received positively. But in Song’s work, where it is separated from everyday life, it looks somewhat ridiculous and seems to reflect the strict social order in the world of men.

The piece is part of “A Room of His Own: Masculinities in Korea and the Middle East,” a rare exhibition that reviews what the identity of men is in our time.

The curator of the show, Lee Hye-won, who is now a professor of art at Daejin University, said she hit upon the idea of creating the exhibition because issues such as the decline of men’s status and reverse discrimination against males began to emerge as hot topics in Korea in recent years, even though many consider the country to be quite patriarchal.

“When I returned to Korea 10 years ago from studying overseas, I saw many Korean men begin to joke about themselves losing ground at home and in society,” she said.

“Then, I came to see comedy programs on TV such as ‘The Committee for the Restoration of Male Human Rights’ satirizing the reverse discrimination suffered by men.”

A decisive moment for the curator came when she saw a famous comedian confess that he has no room of his own at home, while his wife and children have one each.

“He converted one of the two bathrooms at his home into his private room for reading and resting,” Lee said.

So Lee waited for a few years.

“They changed their minds and asked me why I have not yet made the exhibition,” she said. “So, I concluded that it was the right time.”

What is interesting about the show is that it also features artists from the Middle East - Iraq, Israel, Turkey and Afghanistan - another part of the world widely regarded as being heavily patriarchal.

“When Western artists deal with men, they tend to focus on sexuality,” Lee explained, when asked why the Middle East was chosen instead of the West.

“But both Korean and Middle East artists focus on men as social beings - their position in society. So I decided to group them.”

Hacmon’s “T.A.Z.” is a recreation of a security guard’s booth, which is common both in Korea and Israel. It is a minimal space where a guard, generally a middle-aged man in Korea and a young male in Israel, spends many hours.

Park’s “Mr. P’s Agitpunkt” is a room used by an imaginary old man who belongs to a right-wing group. But he is actually modeled after the artist’s own father. It shows a typical space for an old man who went through Korea’s rapid industrialization, an honorable but violent experience.

“As its title, borrowed from Virginia Woolf’s 1929 book ‘A Room of One’s Own,’ suggests, this exhibition is premised on the fact that the discourse on masculinity relies, to a considerable extent, on the achievements of feminism,” the museum said in a press release.

“The male, female, gay and lesbian artists taking part in it, regardless of their own sexual identities, are focusing more on men as social beings than as sexual beings, and on masculinity as a political arena.”