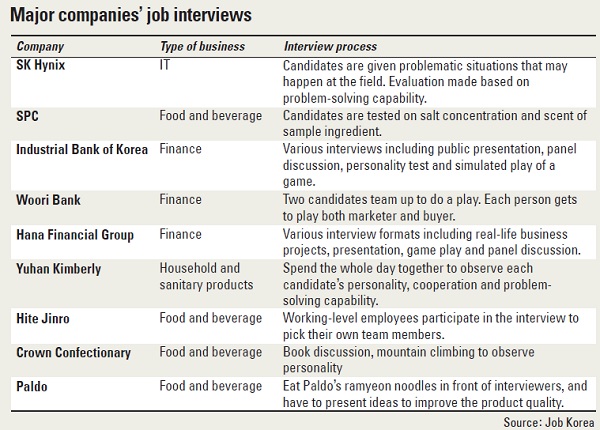 Last year was difficult for job seekers fresh out of college, as Korean businesses showed strong preference for experienced workers across all fields.

Many job market analysts say this was inevitable because the economy struggled due internal and external factors including low domestic consumption since the first half, the weak yen and a stronger dollar. 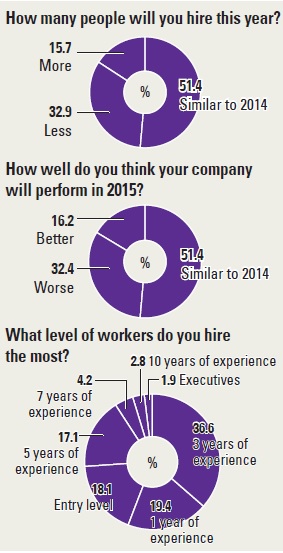 Last year, local conglomerates and their suppliers - small and midsize companies that account for more than 90 percent of local businesses - saw their revenues drop, which forced them to pull back on hiring.

And next year will be worse, according to job market analysts, particularly for first-time job seekers. According to a survey by online recruitment service Job Korea, most companies have said they will either lower their recruitment this year or maintain the level of 2014.

“Recruiting companies’ preference for experienced workers will further intensify this year, as the local economy is forecast to improve slowly,” said Choi Chang-ho, vice president of Job Korea. “While this can be an opportunity for experienced workers to go for a new job, it definitely is a threat for first-time job seekers. To compete against experienced employees, recent college graduates must focus on getting hands-on experience and knowledge about the position they hope to apply for,” Choi said.

According to a survey by Job Korea of human resource departments at 220 companies, 15.7 percent said they will expand hiring of first-time job seekers in 2015, while the rest answered that they will reduce hiring or maintain a similar level as last year.

Participating companies said their biggest demand was for experienced workers, while 18 percent said they were in need of entry-level employees. Employees with one to three years of experience were the most in-demand group, with 55 percent of companies saying they were hiring at that level.

Reflecting the needs of businesses, another recent study released by job portal Saramin showed that a large portion of openings at Korean companies this year will go to workers with relevant experience as companies hire on a demand basis instead of recruiting large groups on a seasonal basis.

In a survey of 400 companies, Saramin found that more than 56 percent said they want to hire workers with experience in their related field.

People who have worked in sales, manufacturing, research and service positions were the most in demand. According to the survey, the companies said that they would hire inexperienced workers for positions in human resources, accounting, finance, public relations, corporate communications and marketing.

Job market experts say that this year, recruiters will boost the proportion of people they hire on a demand basis, instead of sticking to spring and fall hiring seasons.

“From a recruiter’s point of view, demand-basis hiring is better than holding a mass seasonal hiring session, because working-level employees at the department who request a new team member are closely involved in the hiring process, which obviously allows the company to pick the most suitable talent,” said an official at Saramin.

“This is a more efficient hiring method for businesses in a time of low growth and longstanding sluggish economic conditions.”

However, demand-based hiring happens more often based on recommendations from existing employees rather than from public job postings, according to the job website. It added that recent college graduates should constantly update their resumes to attract recruiters browsing job portals, and to keep building their network.

Hyundai Motor has been regularly hiring workers on a demand basis since the fall, keeping an eye out for humanities majors to fill non-research positions. Kia Motors has done the same for both humanities and engineering majors.

This year, recruiters will put a bigger focus on job interviews to pick the best person for each position. Job Korea said that some companies are taking new formats for their interview sessions.

Technology-based companies like SK Hynix and LG Innotek are testing candidates by having them complete projects related to the job they are applying for and by practicing problem solving.

Financial businesses like the Industrial Bank of Korea, Woori Bank and Hana Financial Group are sticking to more traditional methods, such as public presentations, personality tests and panel discussions.

Interviews at food and beverage companies like SPC, which owns Paris Baguette, and Paldo, a ramyeon noodles maker, are focusing on skills related to product development.