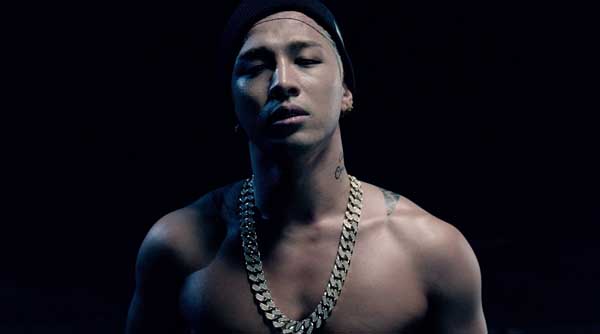 Big Bang’s Taeyang in the music video for “Eyes, Nose, Lips,” a track from his solo album “Rise.” [Screen capture from YouTube]

Prior to the 2015 Golden Disc Awards, which will be held in Beijing this month, Ilgan Sports, an affiliate of the Korea JoongAng Daily, will introduce the K-pop acts that have been nominated for grand prizes.

Big Bang’s Taeyang, boy group Teen Top and male duo Toheart have all been nominated in the public voting section for the most popular artist award. The category specifies that the artist had to release an album last year.

Of all the tracks on the June-released record, the song “Eyes, Nose, Lips” received rave reviews from both critics and music fans, including teenagers and people in their 20s and 30s.

“I spent quite a long time working on the solo album and happened to sing ‘Eyes, Nose, Lips,’” Taeyang said during an interview with local media last year. “I guess it took me a while to release the album because I was meant to sing this song.”

The Korea Creative Content Agency conducted a survey last year to get a good grip on the preferences of overseas K-pop fans. They selected “Eyes, Nose, Lips” as the best K-pop track of the year.

It was also a year of growth for Teen Top, which marked its fourth anniversary last year.

The six-member boy group went on a worldwide tour, which surely made them more mature.

The boy group’s digital single “Teen Top Exito,” which was released in September, was recorded at London-based Metropolis Recording Studios to ensure a higher quality.

Toheart, a project comprised of Shinee’s Key and Infinite’s Woohyun, received explosive feedback upon the release of their debut “1st Mini Album.”

The record, which was released in March, offers various genres of music from folk to R&B and has sold more than 100,000 copies.

The male duo currently is ranked second in the public voting section for the most popular artist who released an album last year.