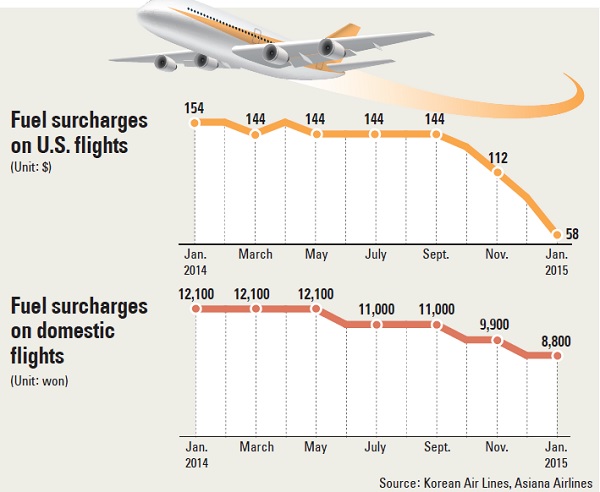 For airline passengers, fuel surcharges are often considered the second part of the ticket price.

But with the falling price of crude oil, people planning to fly in the future will save money as fuel surcharges drop.

For Asian air carriers, fuel surcharges are based on the Mean of Platts Singapore Kerosene (MOPS) price assessments. According to Platts, a global energy information provider, the MOPS fell to its lowest level in more than five years Tuesday after hitting $66.50 per barrel. The last time the benchmark was lower was on May 26, 2009, at $64 per barrel.

“Asia’s jet fuel/kerosene market remained under pressure from tepid demand amid ample stockpiles in the region,” Platts said in a release.

“Weak demand, along with the continuous fall in benchmark Singapore jet/kerosene prices, has opened the arbitrage window from South Korea to the U.S. Gulf Coast.”

In fact, fuel surcharges in Korea have been gradually declining since September.

For a one-way flight to the United States this month, Korea’s two full-service air carriers - Korean Air and Asiana - are charging $58 for fuel surcharges, down from $90 in December.

The fuel surcharge for international flights for February is decided on the average price of MOPS between Dec. 16 and Jan. 15. From Dec. 16 to Jan. 7, the average MOPS was 171.54 cents per gallon.

If the average MOPS stays at about 170 cents until Jan. 15, the fuel surcharge is expected to drop to Level 3, three down from the current level.

Korea’s fuel surcharge rate structure consists of 33 levels. Level 1 refers to when the MOPS is set between 150 cents per gallon and 160 cents. The level changes with each 10 cents per gallon.

Some experts are saying that with the oil price decline, the average MOPS could go below 150 cents. Korean air carriers don’t charge fuel surcharges below 150 cents. If that happens, it will be the first time since August 2009 that customers won’t pay surcharges.

Industry insiders said that since fuel surcharges are based on the jet fuel price from the previous month, consumers should not book their flights too far in advance.

Meanwhile, local airlines are saying they are not planning to lower basic fares despite the oil price drop. But consumers are complaining that they raised fares in the past when oil spiked. In 2012, starting with KAL, local airlines raised fares for domestic flights by 10 percent.

“Setting the basic fare of the flight comes with various factors and the fuel price is only of them,” said a spokesman for Asiana Airlines. “Besides the oil price is very flexible and fares are set with a long-term plan.”

The International Air Transport Association (IATA), which represents 250 airlines comprising 84 percent of global air traffic, said last month that the “impact of lower fuel prices will be realized with a time lag, due to forward fuel-buying practices.”

The industry body previously predicted that jet fuel prices are expected to average at $99.9 per barrel in 2015.