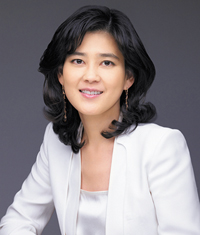 Lee Boo-jin, the eldest daughter of Samsung Electronics Chairman Lee Kun-hee and president of Hotel Shilla, has been selected as an independent non-executive director on the board of Citic Group, one of the largest state-owned investment companies in China.

This is the first time the business magnate has taken a non-executive director post in an overseas company.

Industry sources see Lee’s foray into the Chinese investment company as a strategic move to gain a foothold in the Chinese market.

In a statement issued by Citic Group Chairman Chang Zhenming last month, the company confirmed that Lee was appointed as an independent non-executive director, effective Dec. 19.

“Ms. Lee has been the president and chief executive officer of Hotel Shilla Co., Ltd. [listed on the Korea Exchange] since December 2010,” the statement read.

“The appointment as an independent director is more than just an issue of a certain company,” said a source at the Federation of Korean Industries. “It opens more doors for cooperation between Chinese and Korean companies and contributes to people-to-people diplomacy between China and Korea.”

Founded in 1979, Citic Group’s business spans real estate, mining, energy and banking. Recently, it has embarked on massive restructuring and investment in a push to tap overseas capital. The transformation of Citic comes on the heels of Chinese President Xi Jinping’s drive to reform and liberalize state-owned companies, including allowing more private investment in state businesses.

Last year, the group listed its main operating arm in Hong Kong by merging with its Citic Pacific subsidiary in a deal valued at $37 billion. The entire assets of the investment company amount to 752 trillion won ($686 billion).

Given that the company is owned by the state and largely directed by Xi’s policy, some sources see the appointment as a reflection of Xi’s trust in the Korean company.

“In the global market, Chinese and Korean companies compete with each other,” said an industry source familiar with the matter. “But the fact that the state company invited Lee as a non-executive director indicates trust and a gesture for deeper economic cooperation.”

Xi stayed at Shilla when he visited Korea last year.

Hotel Shilla confirmed that Citic Group approached Lee about the position. “We assume that Citic took into consideration the global image of Samsung and Lee’s position as the top figure at one of the largest Korean hotel operators,” said a source at Hotel Shilla who requested anonymity.