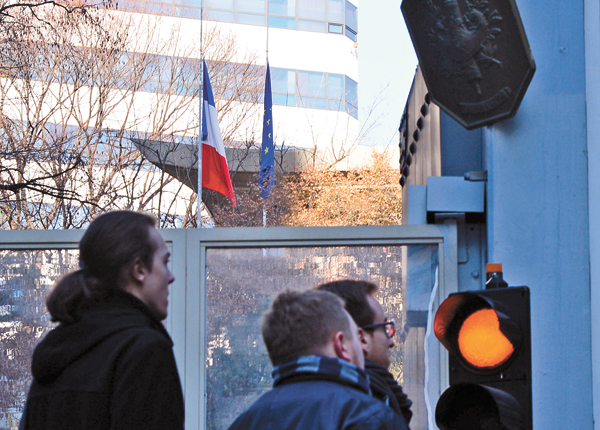 The French Embassy in Seoul places its national flag in its mission compound at half-mast in mourning for the victims of the terrorist attack in Paris. [NEWSIS]

The Korean government on Thursday “strongly condemned” acts of terrorism following the shocking attack on the headquarters of a satirical French newspaper in Paris Wednesday that killed 12 people.

On Wednesday around noon, in what is considered the most deadly terrorist attack in France in decades, masked gunmen dressed in black with possible links to Al Qaeda raided Charlie Hebdo’s headquarters in eastern Paris, killing the paper’s chief editor, veteran cartoonists, journalists and two police officers before fleeing.

The incident prompted a nationwide manhunt.

“The shock from the Jan. 7 act of terror on the Charlie Hebdo headquarters in Paris that has sacrificed the lives of many, including police, is unfathomable,” Noh Kwang-il, the Korean Ministry of Foreign Affairs spokesman, said in a briefing.

Korea joined in with the many voices internationally expressing outrage at the injustice and condolences for the victims, their families and the people of France.

“Our government is of the firm position that terrorism is an anti-society, anti-humanity criminal act that must be eradicated,” Noh said, adding that Seoul “will be active in the global community and United Nations’ efforts to eliminate terrorism.”

UN Secretary General Ban Ki-moon also called the attack “a horrendous, unjustifiable and cold-blooded crime” that was “a direct assault on a cornerstone of democracy, on the media and on freedom of expression.”

Paris raised its terrorism alert to its highest level on Wednesday. French President Francois Hollande called the incident “undoubtedly a terror attack” and said that there had been several terrorist attacks thwarted in France in recent weeks.

French police have currently identified and are still searching for the suspects, two brothers in their early 30s who were heavily armed and suspected to have been trained by Al Qaeda in Yemen. Their 18-year-old accomplice, Mourad Hamyd, turned himself into police on Thursday.

Charlie Hebdo, a weekly publication, caricatured the Prophet Mohammed naked in 2012 among other satires of various religious and political figures. It was previously firebombed in 2011 for its editorial depictions of Islam.

The gunmen were described by witnesses as having headed straight into a daily editorial meeting and shooting editorial director Stephane Charbonnier in a methodical and systematic massacre. Besides the dozen killed, another 11 people were wounded. Some sustained serious injuries.

France has been a target of Al Qaeda and the Islamic State since joining in the U.S.-led effort against the Islamic State in Syria and Iraq (ISIS) and conducting airstrikes against extremists, which are also supported by Korea. 