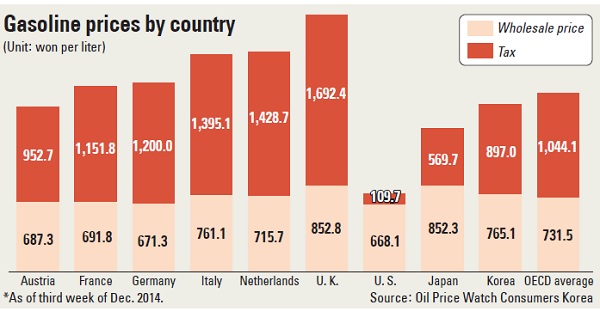 The Korean government is pushing the oil and gas industry to cut prices of petroleum more aggressively following the fall in global crude prices, but the industry says there is little room to maneuver unless there is a tax cut.

The Ministry of Trade, Industry and Energy gathered high-ranking officials on Friday from eight industrial groups - including the Korea Petroleum Association, Korea Oil Station Association and Korea LPG Association in Seoul - and asked for their “‘voluntary cooperation” to reflect the falling crude price in the pricing of their products.

“Although global oil prices are gradually falling, it is recognized that the speed of gas-price declines at the gas stations is slow,” said Chae Hee-bong, the ministry’s energy policy director. “We ask the industry and associations to cooperate so the general public can benefit from cheaper oil prices.”

The meeting among industry officials was originally scheduled next week, but it was moved up after Finance Minister Choi Kyung-hwan said at a meeting of economics officials Wednesday that there should be an effort to make the drop in crude prices be reflected in consumer prices to boost domestic spending.

According to data from the Energy Ministry, the price of international crude oil has been cut more than 50 percent compared to a year ago. Dubai crude, which accounts for about 80 percent of Korea’s crude imports, was priced at $104.01 per barrel in January 2014, but on Thursday, it was traded at $47.50 per barrel.

Gasoline and diesel prices have been going down in Korea, but the government said that the pace doesn’t match that of the crude price drop. The average gas price was 1,861.28 won ($1.71) per liter last June, and it sank to 1,564.07 won as of Wednesday, according to a price chart by the Korea National Oil Corporation (KNOC). That is only a 16 percent drop.

The ministry is claiming that the gas price should be lower. Although it acknowledges that the price of gasoline can vary by region and depend on the situation of each gas station, in some places there is a price difference of more than 700 won per liter between gas stations in the same region - meaning there is still room for other gas stations to lower their prices.

For instance, the ministry’s data showed that the difference between the highest and cheapest gasoline in Gwanak District in Seoul was 759 won.

“With price comparisons between petroleum products and LPG, we expect this to lead to competition among gas station and the benefit of oil price drops to be delivered to consumers,” the group said.

The oil and gas industry is saying that it is already reflecting the falling crude prices in their products.

“With a drop in crude prices, we suffer big losses in the value of our inventories, so we proposed to the government to boost our competitiveness by pushing market-friendly policies,” the Korea Petroleum Association said in a statement.

Industry insiders said that in order to see more declines in the gas price, the government should lower the tax on the product. As of last week, taxes accounted for 56 percent of local gasoline prices, according to data from KNOC.

“There is no room for gas stations to lower the retail price by reducing our distribution margin,” said Korea Oil Station Association chief Kim Mun-sik. “Unless the government lowers the oil tax, the gasoline price wouldn’t go under 1,300 won.”

But the government recently said that it doesn’t plan to lower taxes imposed on petroleum products. The government’s tax revenue from oil products is about 20 trillion won a year.

Only the value-added tax has been changed slightly.