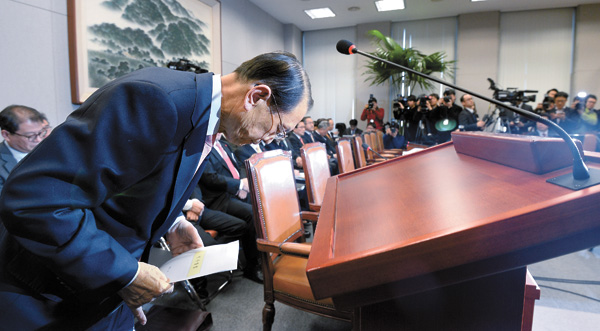 Kim Ki-choon, the presidential chief of staff, bows before he testifies before lawmakers at a parliamentary steering committee session on Friday at the National Assembly over the scandal prompted by the leak of a Blue House document. Kim said he was deeply sorry for the incident.

The senior presidential secretary for civil affairs abruptly offered to resign from his post Friday in protest of a demand by the National Assembly that he testify before lawmakers on a parliamentary steering committee.

Kim Young-han expressed his desire to step down on Friday amid a flurry of criticism from the main opposition that he did not appear for questioning by lawmakers on the committee over his alleged intervention in a prosecutorial investigation into the scandal concerning a leaked Blue House report.

Kim’s move came as a shock to those in and outside the presidential office because his absence at the parliamentary session was in direct defiance of the instructions given by Kim Ki-choon, the presidential chief of staff.

“Kim considers the demand for his appearance as politically motivated even though he was not even in a position to be aware of the leak scandal,” Blue House spokesman Min Kyung-wook said of the secretary’s refusal to testify. “Kim was resolved not to set the precedent in which a civil affairs senior secretary succumbs to political pressure.” 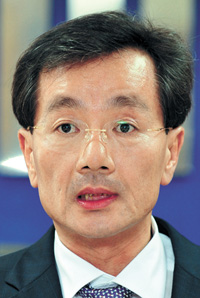 The spokesman added that the Blue House will hold him responsible for having disobeyed the presidential chief of staff and refusing to testify at the parliamentary session.

It is expected that the Blue House will accept Kim’s resignation.

National Assembly lawmakers requested Kim’s presence over suspicions that he may have been at the center of the leak, which has shaken the political establishment over the past few months.

The document, which was first quoted in a daily newspaper report in November, insinuated that the presidential office was engaged in a factional tug of war and that policy decisions were being covertly influenced by Chung Yoon-hoi, who was formerly an aide to President Park Geun-hye.

The presidential chief of staff apologized in front of lawmakers for the trouble the scandal had caused, saying he was “deeply sorry” and will reflect on his actions. It was the first time Kim had expressed any sort of public remorse over the incident.

However, he also denied claims made in the leaked report that said senior presidential aides frequently consulted with Chung in setting policy directives. The report also alleged that the former aide sought out ways to oust the presidential chief of staff from his position.

“The three presidential secretaries and other staff never discussed national affairs with people outside of the presidential office [as was described in the leaked report]. It is unfair to accuse them of such allegations,” he said.

The 76-year-old’s testimony on Friday came after prosecutors announced that the details in the leaked document describing Chung’s alleged meetings with key presidential officials were unsubstantiated.

The findings were part of their interim investigation report, made public at a briefing on Monday.