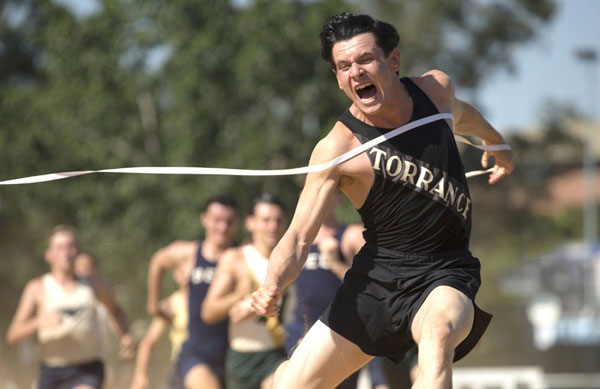 Jack O’Connell plays an Olympic runner in “Unbroken,” which caused protests in Japan for “distorting the truth” about the country’s World War II war camps. It opened in fourth place in Korea. Provided by the distributor

Korean movie “Ode to My Father” is on its way to hitting the 10 million admissions mark in the coming week.

It attracted 1.1 million viewers during the weekend, which brought its four-week total to 9.6 million, according to the state-run Korean Film Council Monday.

Distributed by CJ Entertainment, director Yoon Je-kyun’s family odyssey set in the second half of the 20th century in Korea added 9.1 billion won ($8.3 million), equivalent to 43 percent of weekend ticket sales at the box office, to its gross sales of 75.6 billion won since opening on Dec. 17.

Featuring Hwang Jung-min as Deok-soo, who becomes the breadwinner of his family at a young age after losing his father during the Hungnam Evacuation in the 1950-53 Korean War, the film has triggered nostalgia from local viewers.

The third installment of Neeson’s revenge trilogy in which he plays a former CIA agent has taken 14.2 billion won so far in local theaters.

“Penguins of Madagascar,” created by DreamWorks Animation, was at No. 3, attracting an audience of 301,565 at 532 screens nationwide.

The cute penguin quartet from the third edition of “Madagascar” in 2012 earned themselves their own franchise, receiving a mighty welcome from fans young and old.

Angelina Jolie’s “Unbroken,” which drew advance attention with nationalist protests in Japan against the film for its depiction of the brutal prison camps that existed in the country during the World War II, opened in fourth place with 147,785 viewers.

Actor Jack O’Connell plays Louis Zamperini, a heroic Olympic runner from the United States who survived years of horrifying torture and violence in several Japanese concentration camps as a prisoner of war when his plane crashed into the Pacific.

When the movie’s storyline was unveiled, some right-wing politicians in Japan denounced the feature, citing that it distorted the truth, and called for Jolie to be banned from visiting the country.