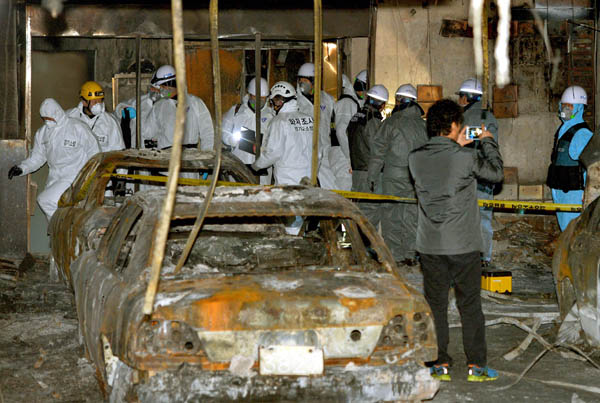 Authorities on Monday investigate an apartment building in Uijeongbu, Gyeonggi, for clues behind Saturday’s blaze, which has left four dead and 11 critically injured as of print time Monday. [NEWSIS]

Authorities looking into a blaze that killed four people and injured more than 100 at several apartment blocks in Uijeongbu over the weekend said Monday that the fire’s rapid spread was likely triggered by flammable materials used to construct the outer walls of at least one of the buildings.

The announcement came after a five-hour investigation Monday into one of the residences that caught fire in downtown Uijeongbu, Gyeonggi, on Saturday morning.

“The fire seemed to have spread through the outer wall, which was made from dryvit, and expanded towards stairways, the elevator and power lines,” said Lee Yeon-jae, an official with the Uijeongbu Fire Department and a member of the investigation team.

Lee added it is likely that the swift spread of the fire was also exacerbated by how closely the buildings were to one another.

The probe will continue Tuesday on the other torched establishments.

Four people - one man and three women - died and 126 individuals were injured from the incident as of Monday.

Of the wounded, 11 are in critical condition, the Uijeongbu fire authority said.

“We will search [the scene] from various angles, focusing on matters the victims are most curious about, like how the blaze grew out of control and why it couldn’t be controlled any earlier,” said Woo dong-seok, a police officer who was part of the investigation team.

The fire in Uijeongbu, 27 kilometers (17 miles) north of Seoul, initially broke out at around 9:15 a.m. in the above-ground parking lot of the 10-story Daebong Green Apartment building when a parked motorcycle caught on fire, the city’s fire department said after reviewing CCTV footage of the scene.

It remains unclear how the bike caught on fire, but the police said Sunday there is a low possibility it was arson after it making inquiries into the driver, a resident hospitalized in an intensive care unit.

The Uijeongbu Fire Department said strong winds seemed to have contributed to the blaze, which spread to other vehicles in the parking lot before eventually climbing the exterior of the structure and continuing to two other apartment blocks - one 10-story building at 9:55 a.m. and one 15-story building at 10:15 a.m.

A four-story parking lot and two other low-rise buildings also caught on fire.

Four helicopters and 160 firefighters were sent to the scene. The blaze was extinguished at 11:44 a.m, almost two and a half hours after it started.

It has been projected that economic losses from the fire will add up to at least 9 billion won ($8.28 million).

At least 225 people lost their homes in the incident, many of whom are staying in a makeshift shelter at a gym at Gyungeui Elementary School, which was arranged by the Uijeongbu city office about 1.25 kilometers from the scene of the accident.

Local safety experts have pointed out that the two 10-story buildings had no sprinklers inside and that the roads leading to the scene were too narrow for fire trucks to pass through.

They also brought up the idea that the materials used to construct their exteriors might not have been coated in a flame retardant.