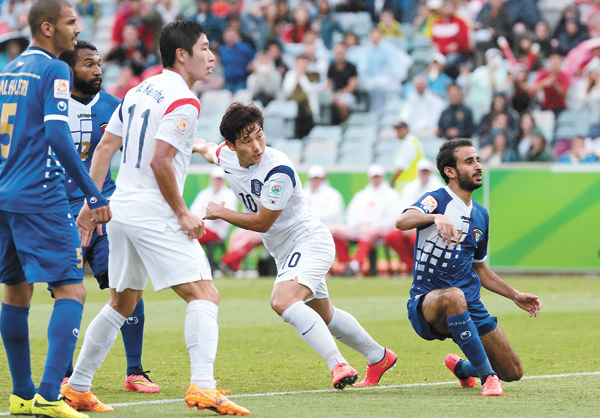 Nam Tae-hee, second from right, watches the ball as he scores his country’s first goal during their AFC Asian Cup match against Kuwait in Canberra, Australia, on Tuesday. [AP/NEWSIS]

The Taegeuk Warriors booked a spot in the quarterfinals of the Asian Football Confederation’s Asian Cup after winning their match against Kuwait, 1-0, on Tuesday in Canberra, Australia. But the team’s performance did not look strong enough to take the team to its goal of winning the tournament.

Attacking midfielder Nam Tae-hee’s goal in the 36th minute lifted the team over the Middle Eastern country. But the 125th-ranked team was a tough opponent, just as Manager Uli Stielike predicted in a press briefing before the match. While Kuwait was trailing 1-0, the team’s offense stayed strong in the second half and was a constant threat even though they failed to equalize.

For Tuesday’s match, Stielike did not hesitate to change the starting roster from the team’s first Group A match against Oman on Saturday, and he previously said that all 23 members of the national team had the potential to start. Compared to the first match, the manager had changed seven of the starting 11.

Some of those who did not make the starting list on Tuesday are key players. Before the match, the Korea Football Association announced that Lee Chung-yong, who was injured in the match against Oman, was found to have a hairline fracture in his right tibia and would head back to his club, the Bolton Wanderers, because he needs three weeks to recover. Midfielders Son Heung-min and Koo Ja-cheol and goalie Kim Jin-hyeon skipped the game because they all had a slight cold.

The German manager fielded Lee Keun-ho, who plays for El Jaish SC, as a forward and put the sole goal-scorer in the first match, Cho Young-cheol, of Qatar SC on the bench. In midfield, Nam Tae-hee of Lekhwiya SC, Kim Min-woo of Sagan Tosu, Park Joo-ho of Mainz 05 and Lee Myung-joo of Al-Ain FC made their first appearance in the tournament. Defender Kim Young-gwon of Guangzhou Evergrande FC started in place of Kim Chang-soo of Kashiwa Reysol, who was injured in the previous match. Kim Seung-gyu of Ulsan Hyundai, who became hugely popular after his performance in last year’s Brazil World Cup, was put in goal.

The two teams made few attempts on goal for most of the first half. A free kick headed for a Korean goal post in the 12th minute was punched away by Kim Seung-gyu, and Kuwaiti forward Yousef Nasser missed an opportunity in the 24th.

The first on-target shot of the match was taken by Lee Keun-ho in the 31st as he faced goalie Hameed Youssef one-on-one, but his shot was blocked.

The deadlock was broken in the 35th, when right fullback Cha Du-ri broke through and crossed the ball to Nam Tae-hee, who scored on a header for the only goal of the match.

But Kuwait did not sit back and let the Taegeuk Warriors take an easy win. When the second half kicked off, the Kuwaiti side relentlessly attacked the Korean goal and penetrated the shaky defense. Midfielder Ali Maqseed took a shot in the 48th that hit the left post and in the 52nd, goalie Kim Seung-gyu cleared a threatening ball.

Maqseed continued to have threatening chances with one midrange effort on target in the 55th and another close-range shot in the 60th.

In the second half, Korea made occasional counterattacks, but none good enough to widen its gap against the Middle Eastern team.

“Kuwait was more aggressive than we expected,” Stielike said after the match. “I don’t like to say this, but Kuwait was better than us in many ways and we were lucky to win the match.”

Korea’s final Group A match against Australia is scheduled for Saturday in Brisbane. Australia, which is leading the group, beat Oman 4-0 on Tuesday.