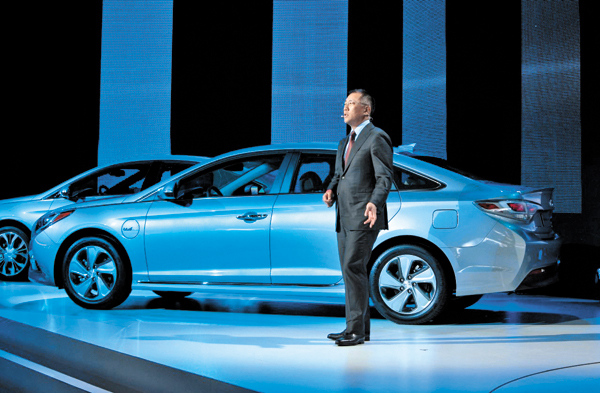 Hyundai Motor Vice Chairman Chung Eui-sun introduced the Sonata PHEV at the North American International Auto Show that kicked off in Detroit on Monday. Provided by the company

Hyundai Motor has introduced its first plug-in hybrid vehicle (PHEV) as the company pushes to become a world leader in the environmentally friendly car market.
At the North American International Auto Show that kicked off in Detroit on Monday, Hyundai unveiled the Sonata plug-in hybrid electric vehicle, which runs on both gasoline and electricity and can be charged through external electric socket.
“It is in our 10th year that Hyundai Motor started producing the Sonata sedan in Alabama,” said Vice Chairman Chung Eui-sun, who is the son of Hyundai Motor Group Chairman Chung Mong-koo.
“We now want to inform the world that we will be a leading company in the environmentally friendly car market, which recently has been one of major auto trends among automakers,” Chung said. “The Sonata reflects the company’s capabilities in the market because it is our first PHEV that is developed using in-house technology.”
Based on its popular midsize sedan, Hyundai said the new hybrid Sonata will travel up to 22 miles, or 35.4 kilometers, on a single charge in all-electric mode, powered by a 9.8 kilowatt-hour lithium polymer battery and a 50-kilowatt electric motor. The battery can be fully charged at home in about three hours, the company said.
When battery power falls to a certain level, it automatically switches to hybrid mode, and Hyundai expects the model to get combined fuel efficiency of 40 miles per gallon as it is also equipped with a 2-liter Nu 4-cylinder GDI engine that delivers a maximum of 154 horsepower and 140 pound-feet of torque.
Along with this PHEV model, the
company introduced a non-plug-in Sonata Hybrid, which the company started selling in Korea in December, as part of its plan to expand market share in the United States, the largest environmentally friendly car market in the world. The non-plug-in model has a 38-kilowatt electric motor that has 8.6 percent more power than the previous version.
The Sonata PHEV, which will be manufactured in Korea, will be sold in its home market in the first half of the year before being introduced in the United States and other countries. The price of the new hybrid was not disclosed.
Hyundai Motor wants to become the world’s second-largest manufacturer of fuel-efficient cars by 2020. The world’s fifth-largest automotive group last year announced plans to release 22 environmentally friendly cars by 2020.
In order to target North American consumers, Hyundai also unveiled a crossover truck concept car, the HCD-15. This is the first time Hyundai has introduced a pickup truck in an auto show in North America.
The Santa Cruz pickup prototype has been in development for 30 months and is at least three years away from production, if consumer reaction is positive, Dave Zuchowski, president of Hyundai Motor America, told reporters.
The model is based on the same chassis as the Tucson sport utility vehicle, he said.
“We’re not into ploughing the same old groove as everyone else,” Zuchowski said after the diminutive silver pickup was shown to members of the media on Monday.
Smaller pickups are getting a fresh look in the United States, as General Motors Co. adapted a design from markets outside the country to produce its new midsize Colorado.
Toyota Motor, the market leader for small pickups also showed a redesigned version of its Tacoma today in Detroit.
The smaller Santa Cruz is aimed at buyers who can’t afford the $40,000 cost of the average pickup, said Mike O’Brien, vice president of corporate and product planning for Hyundai Motor America. Because of costs and other limitations, 80 percent of buyers won’t consider a pickup, he said.
As “urban adventurers” move back into U.S. cities, they are plagued by tighter parking and other restrictions that make larger pickups impractical, said Mark Dipko, director of corporate planning for Hyundai Motor America.
The four-wheel-drive prototype can hold five passengers.

BY JOO KYUNG-DON, KWON SANG-SOO AND BLOOMBERG [kjoo@joongang.co.kr ]