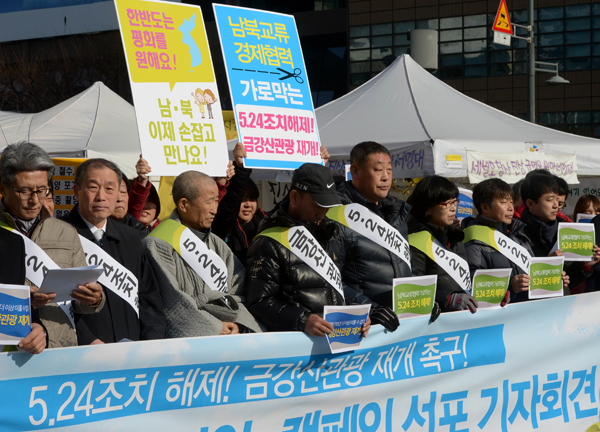 Representatives from 160 companies as well as civic and religious group leaders host a press conference Tuesday at Gwanghwamun Plaza in central Seoul, where they urged the Park Geun-hye administration to lift the sanctions on North Korea, better known as the May 24 measures. [NEWSIS]

A group of entrepreneurs announced Tuesday that their businesses with North Korea are on the brink of bankruptcy due to government sanctions on Pyongyang and demanded that economic restrictions be lifted immediately.

Representatives from 160 companies as well as civic and religious group leaders hosted a press conference at Gwanghwamun Plaza in central Seoul, where they urged the Park Geun-hye administration to lift the sanctions, better known as the May 24 measures.

They also demanded that the government resume tourism at Mount Kumgang as soon as possible.

Following the North’s sinking of the South’s warship Cheonan in March 2010, the South Korean government adopted the May 24 measures to bar all trade and investments with the North.

The inter-Korean tour program to the North’s scenic mountain Kumgang was suspended in 2008 after a South Korean tourist was shot dead by a North Korean soldier.

“Of about 1,000 companies that devoted everything to inter-Korean economic cooperation programs by trusting the government, more than 80 percent are now shut down,” the businessmen said in a statement.

They cited their accumulated losses as totaling more than 15.8 trillion won ($14 billion) since 2010. “We looked after our factories in the North as if they were our own children, but we couldn’t even check on their condition over the past five years.”

According to the businessmen, the May 24 measures actually did more harm to them than the North. “After we established the basis, companies from China and Europe easily entered and benefited,” they said. “The North, therefore, suffered almost no hardship.”

They also criticized the government for bending the rules to make conglomerates an exception to economic sanctions, pointing to the Rajin-Khasan project as an example. The consortium with Posco, Hyundai Merchant Marine and the Korea Railroad Corporation is pushing forward a joint logistics program that would ideally reduce the costs of importing coal from Russia via North Korea.

The government exempted the project last year from the May 24 sanctions, considering it a part of President Park’s Eurasia Initiative that would boost the regional economy through free trade and economic cooperation in the Eurasian bloc.

“The government ignored our blood, sweat and tears and tied our hands and feet while giving special treatment to conglomerates,” they said. “Asking us to endure one more year with sanctions is a death sentence for us.”

The businessmen added that they will hold a weekly demonstration every Tuesday to demand sanctions be lifted.

It remains to be seen how the Park government will respond to their demands. Government officials have admitted to the need to lift sanctions, saying it could be a breakthrough in improving frozen inter-Korean relations. They also acknowledged the hardships the South Korean companies have faced.

During her news conference Monday, Park hinted at her willingness to lift the sanctions, saying that an inter-Korean dialogue must take place to find a suitable way to handle it.