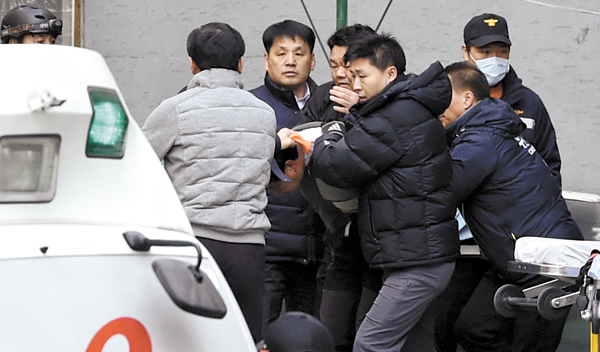 The 46-year-old man surnamed Kim is suspected to have killed his 16-year-old stepdaughter and her biological father after holding them in his wife’s house for at least five hours.

A 17-year-old female, who is also Kim’s stepdaughter, and an unidentified female were found alive.

Details around the case remained obscure as of press time on Tuesday, and the Ansan Sangnok Police Precinct is currently investigating. Police officers there said that they were unable to obtain immediate testimony from the 17-year-old because she was in shock.

Police who briefed reporters during the standoff said that they received a call from Kim’s wife, a 44-year-old also surnamed Kim, at 9:36 a.m. on Tuesday.

She reportedly told authorities that her husband had called to inform her that he had taken her ex-husband and two daughters “hostage.”

When police officers and fire fighters arrived at the scene, the armed man demanded that police let him meet with his wife, from whom he is separated.

When she arrived soon afterward and tried to persuade him via telephone to free the four hostages, he repeatedly shouted and insulted her, according to police.

The suspect, who was reported to be living approximately 8 kilometers from his wife, then told her to enter the house, which she refused.

Police raided the house on the third floor of the four-story apartment building at around 2:30 p.m. after the woman informed police officers that her husband told her he had stabbed two people and that he was “sorry.”

Just minutes before, the 17-year-old had told her mother over the phone that her stepfather was threatening her with an unidentified weapon to the throat.

Park, the woman’s ex-husband, was found stabbed to death, while her youngest daughter was critically injured when the police busted through the windows and the door.

The suspect reportedly did not resist arrest.

The 16-year-old died on her way to a nearby hospital.

Police officers said that the suspect told them during questioning that he stabbed his wife’s ex-husband a day earlier on Monday, a claim they are looking into.

The two hostages released alive were admitted to a hospital in Ansan on Tuesday afternoon.