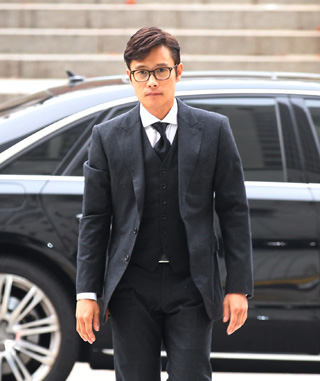 The Seoul Central District Court sentenced Lee Ji-yeon, a 25-year-old model, to a year and two months in prison while her accomplice, Da-hee, 20, a member of girl group GLAM, was ordered to serve one year.

The two were charged after threatening to release a video clip of the actor in August in which he is allegedly drinking alcohol and using lewd language.

They asked for 5 billion won ($4.6 million) from him in return for not publicly releasing the clip.

Throughout the trial, the model insisted she was in a romantic relationship with the actor and had blackmailed him because she felt betrayed when he stopped pursuing her. She stated during the first trial that the actor said he wanted to buy her a house to “develop their relationship further.”

The actor denied the claims.

Jung Eun-young, chief judge of the Seoul Central District Court, dismissed the idea that the model felt rejected, concluding that the two were not in a serious relationship.

“Looking at the text messages exchanged between the two, actor Lee felt amorous toward his counterpart, but the model wasn’t that interested in Lee. We don’t see them as a couple.

“We think the women blackmailed Lee because they were motivated by money,” the chief judge continued.

She also suggested that the model had taken advantage of the actor’s interest in her in order to blackmail him.

“From [the model] Lee’s point of view, she probably felt that the actor liked her because he was a married man but kept in touch with her and also sent text messages, which implied that [he hoped for] sexual intercourse.”

After the court ruling, girl group GLAM has decided to disband, while the parents of model Lee said that they want their daughter to appeal her sentence.

Lee is currently in the United States with his actress wife Lee Min-jeong. Paparazzi photos of the two shopping at a mall in the States were released a few days ago.

The two got married in September 2013.