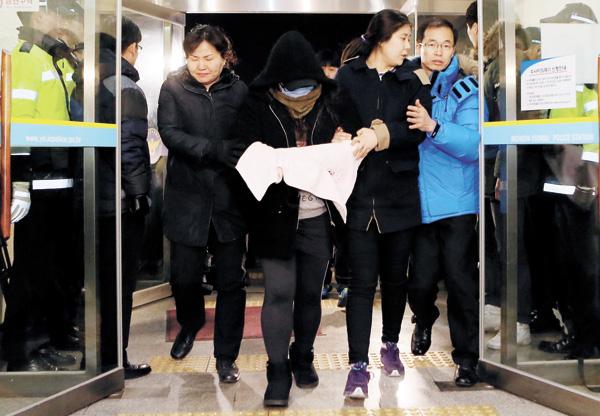 A surveillance video of a day care teacher smacking a 4-year-old to the ground for not eating her kimchi has become Korea’s latest viral exercise in shame and punishment - and the teacher could do jail time.

The 33-year-old female teacher was arrested and put behind bars at the Incheon Yeonsu Police Precinct Thursday evening for further investigation. The police were set to file a pre-trial detention warrant against the teacher on a child abuse charge on Thursday night or Friday morning at the earliest.

The incident took place at a day care center in Incheon on Jan. 8. The mother of the child reported the abuse case to the police on Monday after her daughter told her she had been beaten by her teacher. CCTV video footage was released by the police Monday and quickly went viral.

On Wednesday, the head of the day care center volunteered to halt its operations and made a public apology. Most parents had already stopped sending their children to the center.

Left- Footage from the surveillance camera was released by the police after the mother of the child reported the case on Monday. [JoongAng Ilbo]

The Ministry of Health and Welfare announced Thursday it would officially close the center and disqualify the teacher, who was identified by her surname Yang.

Netizens immediately started hunting for online information about Yang and were successful. Her profile, including her full name, contact information and pictures, spread through the Internet. Several racy pictures from her personal social networking account went viral, most of which showed parts of her upper chest.

Yang is also seen winking at the camera and sticking out her tongue.

Lee Jae-ho, the head of the Yeonsu District Office, also said the district government would permanently shut down the center, even though it might take a while to conduct legal proceedings.

“[Violence] against a child is a crime,” he said in a press briefing. “Child abuse should never take place, not only in Yeonsu District but anywhere in the world. I will punish her as a warning to others so that this kind of thing will never happen.”

In the brief video footage disclosed by the Incheon Yeonsu Police Precinct, Yang is shown smacking a young girl on the head with her right hand. The 4-year-old collapses on the ground, only to get up to stand shakily.

According to police, she claimed she did not hit the student but “slightly pushed” her. She also reportedly admitted to the violence after the police showed her the CCTV footage.

She said she assaulted the young child because the girl did not eat her kimchi that day and that it was a “part of discipline to correct [her eating] habits.”

Officers from Incheon Yeonsu Police Precinct said they were reviewing earlier CCTV footage from the center for more evidence of child abuse.

The police disclosed two additional pieces of CCTV footage to the press on Wednesday that appeared to show Yang tapping a young boy a single time with a xylophone stick and yanking another boy toward her while helping him put on his jacket.

Although officers admitted those incidents weren’t very rough, they said they received at least 16 written statements from parents who claim their children were abused by Yang.

The authors of the most credible statements, whose children are classmates of the female victim, were scheduled to meet with investigators and child consultants on Thursday.

Yoon Jong-ki, the head of the Incheon Metropolitan Police Agency, said Wednesday that Yang “can be severely punished” if the abuse turns out to have been habitual.

The facility had a large poster hanging on the door that read the staff apologizes to everyone in the community for having caused so much pain.

On another corner, a campaign was under way to legalize CCTV installations in all day care centers and to reinforce the qualifications necessary to become a day care teacher.

“I couldn’t sleep after seeing the video,” said Cho Mi-hwa, a 35-year-old mother of two, who lives nearby.

“I heard the day care center’s manager got down on her knees and apologized to the parents, but who cares? She can’t take back the damage inflicted on the child.”

Hwang Ji-suk, 36, a mother of four with a 4-year-old child attending another day care center in the area, burst into tears during her demonstration.

“You can’t imagine how much I cried seeing that video,” she said. “I didn’t send my kid to his day care center yesterday. I just held him tightly the entire day.”

Lawmakers from both the ruling Saenuri Party and the main opposition New Politics Alliance for Democracy (NPAD) convened Thursday, when they decided to establish a joint task force to look into the controversial case.

Lee Wan-koo, the floor leader of the Saenuri Party, vowed to revamp the current day care system to legalize CCTV installations and tighten up licensing for teachers.

There are 67 training centers for day care center teachers in Korea. The lowest degree is eligible to anyone who has graduated from high school and successfully completed 65 academic credits.

The program usually runs six months to a year.

However, Lee Eun-kyung, who runs a day care center in Daegu, pointed out that the degree does not include a personality test or an interview, and that it was those failures that seemed to have caused the controversy at the day care in Incheon.

“Training centers don’t teach character, or the fact that child abuse is a crime,” Lee said, stressing that the bar is too low.