To halt bird flu, freeze on transport is ordered

To halt bird flu, freeze on transport is ordered 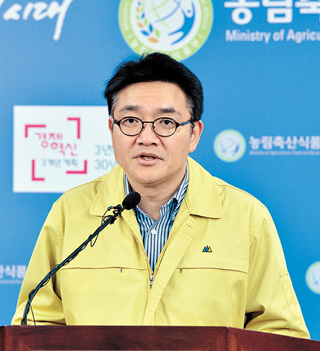 Lee Cheon-il, an official from the Ministry of Agriculture, said on Thursday that vehicles transporting fowl will be suspended this weekend due to an avian influenza outbreak. [NEWSIS]

The Ministry of Agriculture Food and Rural Affairs ordered a “standstill” this weekend for vehicles transporting fowl to try to stop the spread of avian influence (AI), commonly known as bird flu, a day after the first outbreaks of the season.

Thursday’s order will take effect at 6 a.m. on Saturday and last for 36 hours. It will be applied to 106,000 livestock industry workers and 31,000 livestock facilities. Among the regions where AI outbreaks have been reported are Busan, South Jeolla and Gyeonggi.

The ministry ordered the first such standstill on January 19, 2014, as AI broke out in South and North Jeolla. But the order was only applied to those two regions and failed to prevent AI from spreading on a national level, leading to the culling of 15 million ducks and chickens.

The standstill this time was quicker and more expansive than efforts last year.

“We don’t currently deem the situation dangerous and AI has not spread throughout the country yet,” said Lee Cheon-il, the head of the Livestock Policy Bureau at the Ministry of Agriculture, Food and Rural Affairs. “So it is a preventive measure, particularly since it is the middle of when winter migrating birds fly into Korea and the AI virus gets active with the potential danger of spreading.”

Once the order takes effect, workers, vehicles and equipment related to moving fowl will be sterilized outside of livestock farms and workplaces associated with livestock.

“Because AI mainly comes through migratory birds, we are going to control access to the farms and sterilize all the breeding facilities,” said Kim Sung-sik, the head of the Animal Health and Hygiene Division of the Gyeonggi provincial government.

If the standstill order is violated, a person can face a fine of up to 10 million won or a year in prison. For cases in which fowl must be moved, the farmer needs approval from his provincial government.

Korean residents traveling to countries with past outbreaks of AI - including the United States, China and Germany - are advised not to visit livestock farms, the ministry said.

To prevent the spread of foot-and-mouth disease (FMD), a fatal virus among cloven-hoofed animals - which was found on Jan. 9 to have infected a cow in Anseong, Gyeonggi, for the first time in four years - the ministry ordered livestock vehicles nationwide to be sterilized amid the AI standstill period. 