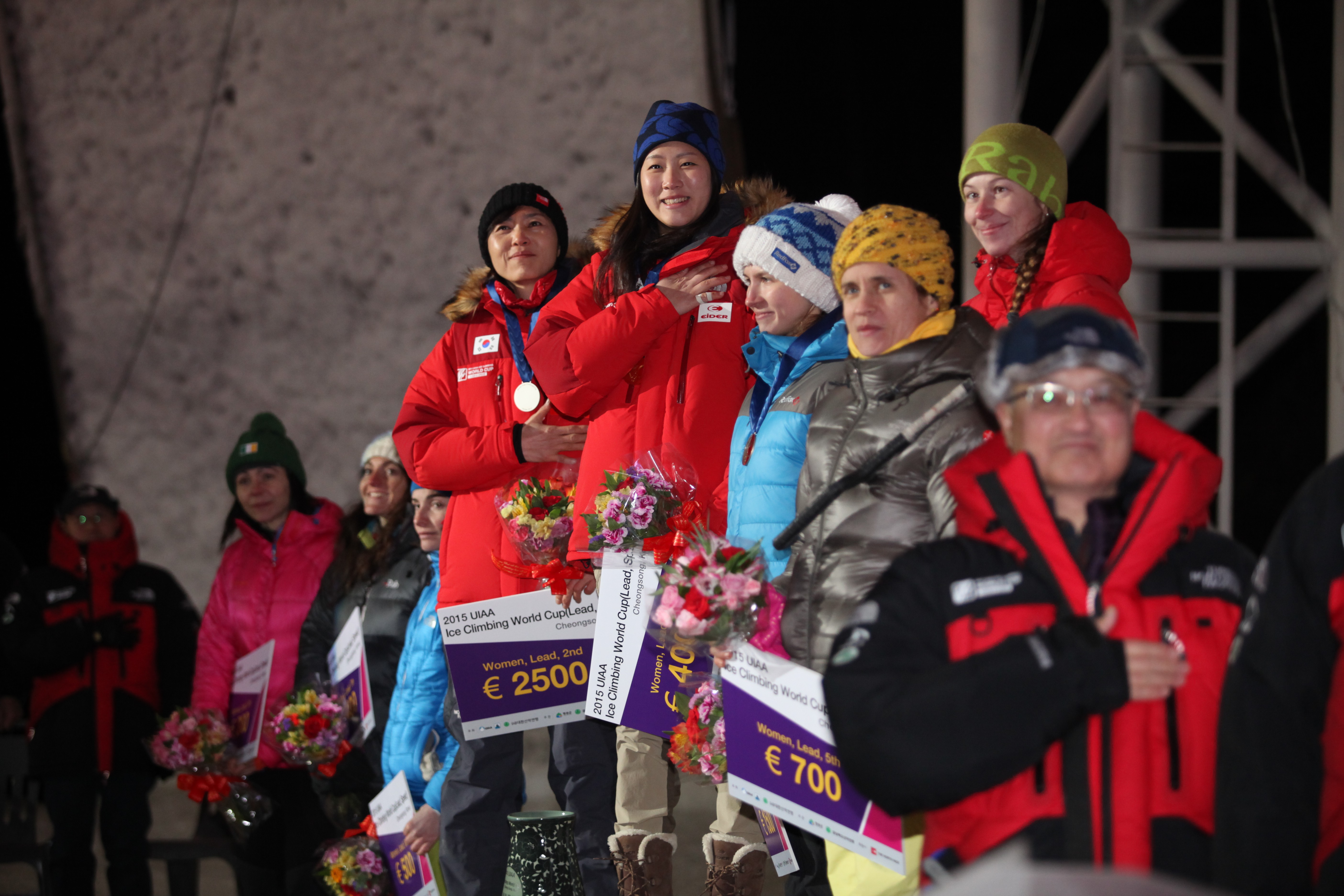 Korean Song Han-narai places her hand over her heart as a salute to the national flag during the awards ceremony after winning the 2015 UIAA Ice Climbing World Cup in Cheongsong, North Gyeongsang. Provided by the Korean Alpine Federation

Song Han-narai, a student at Hankuk University of Foreign Studies, has positioned herself as a rising star in Korea’s climbing circles.

The 22-year-old won the gold medal in the 2015 UIAA Ice Climbing World Cup in Cheongsong, North Gyeongsang, which ended on Jan. 11 - the only competitor to finish the full course among 16 male and female participants.

She is the first Korean to win the championship since it was established in 2011.

Song had some dramatic moments in her race. She was the last person to climb the walls, wasting no time scaling the lead wall.

She was quick and shrewd, never stopping to rest and ploughing through the overhang and the steepest crux sections on the route.

By completing the crux section, she claimed the championship in the event but decided to finish the course. With about 30 seconds remaining, she scaled the rest of the four vertical courses, topping out just before the buzzer sounded.

“I missed a chance to win my first championship last year because I was impatient,” Song said in an interview after the event.

“My first goal this year was to complete the course. I completed all the courses in the semifinals and in the final stages, and that makes me happier than winning a gold medal.”

She added that she had dreamed of becoming a climber since she was in elementary school, after watching professional climber Kim Ja-in, 27.

Kim later became a great mentor to Song after she enrolled at the same high school. And when she switched from rock climbing to ice climbing, Shin Yoon-seon, 35, became another crucial adviser, though the two are now competitors.

The Ice Climbing World Cup is organized by the International Climbing and Mountaineering Federation and is held in Korea, the United States and Europe.

World ranking is decided based on the scores each player earns over five competitions. There is also the possibility that the event could be selected as a demonstration sport in the 2018 Pyeongchang Winter Olympics.