BEIJING - Boy groups were the heroes of the 29th Golden Disc Awards, which wrapped up on Thursday evening after two days of performances and prize-giving in Beijing.

The grand prize was given to Exo, whose 2014 album “Overdose” was selected as the album of the year, while boy band CNBlue went home with four awards, including most popular star and the China Goodwill Star Award.

Out of the 11 recipients who were nominated for the main album award Thursday night - which automatically made them nominees for the grand prize - eight groups consisted of men, including Infinite, Vixx and B1A4. The only female acts to get nods were A Pink, Girls’ Generation and Taetiseo.

Boy bands also dominated the previous day of the event when digital album achievements were acknowledged.

Only five of the 18 trophies were taken by female groups.

When Exo was called out at the end of the night, Suho, the leader of the group, thanked everyone who contributed to making the album. He also wished “happiness” to all the group’s fans, warmly shouting “Let’s be happy!” The audience responded with a loud roar.

Although two of its Chinese members - Kris and Luhan - departed the group last year, Exo remained triumphant with its existing 10 members, having received the honor for two consecutive events.

The popularity of boy groups was even more apparent inside the three-story concert venue, where a majority of the seats were lit up with neon signs cheering on their “oppa,” which means “older brother” in Korean but is also often used as a term of endearment for male stars.

The latest Golden Disc Awards were especially ambitious, inviting the biggest names in K-pop to China’s capital and littering the stage with special performances and guests.

The location’s selection was a response to the exploding popularity of K-pop in China which helped local fans catch a glimpse of their favorite stars. 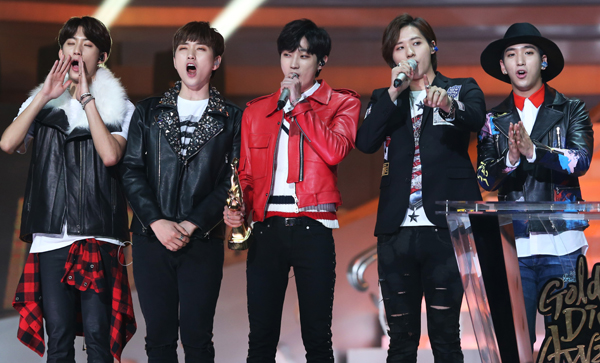 Chen from Exo and Wendy, a singer from Red Velvet, one of SM Entertainment’s girl groups, sang “Endless Love” as a duet, surprising the audience with her high notes. It was definitely one of the most impressive moments of the show’s two-hour run. CNBlue and AOA members Choa and Yuna collaborated on “Love Light.”

“K-pop’s popularity is immense in China,” said Lara Yu, a 27-year-old translator and Beijing resident who was at the awards ceremony. “Those who work actively in China such as Winner and Exo get more familiar to the Chinese public and become popular quickly. I am a big fan of CN Blue and came here to this rare event to see them all.”

The biggest guest of all was Hong Kong action star Jackie Chan, who came to award the grand prize with Hong Jeong-do, the CEO of JoongAng Ilbo and JTBC.

K-pop’s excessive popularity caused a scene at one point during the event. Enthusiastic fans stole reserved seats in the front row. Some were removed from the hall by security. Shouting and aggressive gestures were witnessed near the stage for a few moments.

When the audience’s favorite stars - mostly members of Exo - appeared on stage, some of the crowd stood on their chairs taking photographs non-stop, neglecting both safety and concert etiquette.

It was a sure testament to the popularity of K-pop stars and the strong reputation of the Golden Disc Awards in China.

But more orderly behavior from the audience could have improved the event.

The 29th Golden Disc Awards were broadcast live through Chinese video website iqiqyi.com and will air in Korea on JTBC soon.