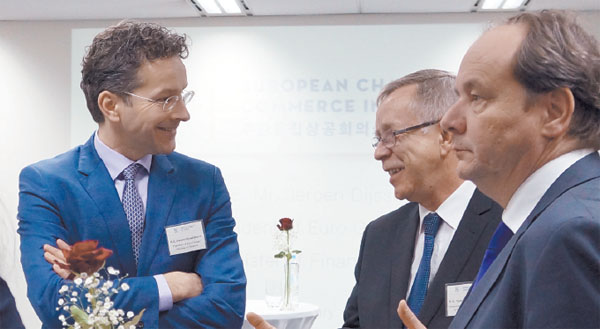 Jeroen Dijsselbloem chats with members of the European Chamber of Commerce in Korea after his presentation at the organization’s headquarters in central Seoul on Thursday. Provided by the chamber

Jeroen Dijsselbloem, finance minister of the Netherlands and president of Eurogroup, talked about the importance of upcoming structural reform in Europe during his two-day visit to Seoul, where that subject is at the top of the Park Geun-hye administration’s agenda.

At a meeting with members of the European Chamber of Commerce in Korea on Thursday, the minister said Europe is pushing to execute reforms in the banking sector and the labor market, among other areas.

Eurogroup is a meeting of the finance ministers of the 19 eurozone countries. The group’s role is to ensure coordination of economic policies and promote conditions for stronger economic growth and financial stability. Dijsselbloem has led the group since January 2013.

“I found out there is great interest in what is going on in Europe,” he told chamber members. “I was struck by the issues of structural reforms that are very vivid in Korea. All Korean partners I talked with told me that structural reform is on the top of agenda here. Structural reforms are so crucial.”

Stimuli from public budgets can help revive individual economies, and an accommodative stance by the European Central Bank (ECB), of course, supports economic recovery in Europe, he said.

“But I am convinced that if we have structural reforms we become stronger. We need to deal with the issue of competitiveness. This is about dealing with problems in the labor market, making sure it becomes more flexible. And it has to do with the labor force, ensuring the availability of better labor, qualitatively and quantitatively,” the minister explained.

“It also has to do with the pension system. We are an aging continent, like many Asian countries. We need to adjust pensions and deal with the costs of health care.”

Europe also needs to open up markets and develop the domestic markets of the European Union, he said, adding there is much work to do in services, and capital and energy markets.

“I’m an optimist. Of course, there are risks in Greece, problems regarding inflation. But long-term structural development is positive. We have come out of the crisis with stronger corporations and better banks. A number of countries have instituted reforms and others have to pick up the pace,” he said. “If you do the right thing, economic growth has more potential than we are showing now. That is my ambition, to pick up the pace of growth and get people back to work.”

Based on those reform efforts, Europe will pursue further growth and stability in the near future, he said. But he hinted that the effect of upcoming quantitative easing (QE) by the ECB may be small this time because the interest rate and currency value are low.

“There is some debate about effectiveness of QE in the present situation,” he said. “Interest rates are already very low. The euro is already low. Still, there might be some effectiveness by taking national bonds off the bank balance sheet, opening up these balance sheets for new businesses boosting credit. For QE, you always should be aware of creating asset bubbles. I am sure the central bank will take that into serious account.”

Dijsselbloem highlighted that eurozone economies are not in much better shape than they were before the crisis.

“We are in a new phase in the eurozone after a period of deep crisis that we have used well to strengthen the governance and structure of eurozone institutions,” the minister emphasized.

Going into the crisis, Europe had growth and stability that was not as solid as it is now, he said. But the European Commission has been given a stronger role to make sure that all countries maintain a commitment to growth and stability. Those countries didn’t have crisis instruments and were unable at the start to support one another.

“Very soon, we built crisis instruments and the European Stability Mechanism, a large fund to support countries. And we built concepts and programs to support countries for a couple of years to make sure they become stronger once again and financially independent. Five countries were in the program and three have successfully exited the program and are able to handle their own public finances. At the start of the crisis, we didn’t have common rules for banks. We didn’t have joint supervision. We didn’t have banks in very good financial situations,” he said.

“Coming out of the crisis now, we have built the Banking Union on the basis of common rules and principles. We have capital regulations for all our banks, and the ECB started in November last year as a supervisor, direct and indirect, for all eurozone banks.”

The largest 130 banks have been taken through assessments and stress tests. Many banks already took care of their problems and many banks already went into markets, refinanced themselves, and restructured their losses, according to the minister.

“A number of banks still have to do more work and over the next couple of years, their capital ratios and capital standards will gradually increase,” he said. “So we are not there yet, but banks are in a much better state and confidence returns.”

His overall assessment of the free trade agreement between Korea and EU was positive.

“There is more potential growth if we use it well. I am in very much favor of those trade agreements. Of course, we have to evaluate if it is really working.”