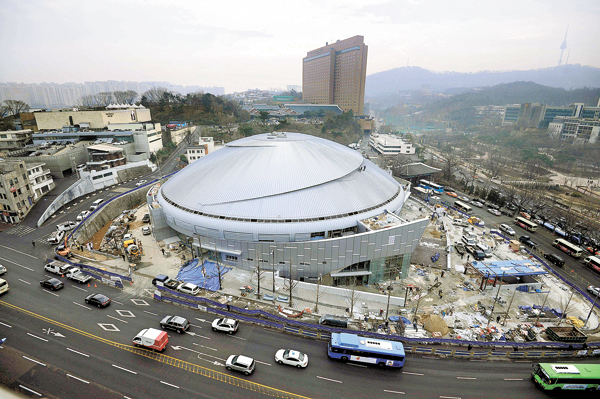 The transformed venue will now be used for various indoor sporting and cultural events, including concerts and musicals.

But despite the change, the main stadium still has qualities reminiscent of the old days - a move intended by the Seoul Metropolitan Facilities Management Corporation, which led the renovation.

“We wanted to make the place feel friendly to people,” said Baek Gong-myeong, a corporation official. “That’s why we also kept the framework of the bleachers.”

The fact that the stadium had so many memories associated with it was the primary reason why officials chose to remodel it, rather than tear it down.

The city government initially considered demolishing the venue, but it ultimately decided to give it a facelift after hearing arguments that such a historically significant place couldn’t just be leveled.

Jangchung Gymnasium is where one of Korea’s greatest professional wrestlers, Kim Il, faced off with his No. 1 rival, Antonio Inoki, in the 1970s, and basketball players Lee Chung-hee and Kim Hyeon-jun staged shooting contests in the 1980s.

Still, the renovation wasn’t an easy task. The local government wanted to keep as much of the original stadium intact as possible.

About 60 percent of the original bleachers remain after reinforcement work, and the entrances and passages where thousands of people passed through each day were kept in their true form.

While leaving the stadium as it was to some extent, the government’s facility management arm also added two more entrances and placed armrests with reclining backs on the seats.

Additionally, the corporation set up retractable bleachers with more than 1,300 seats on the first floor, which could extend total floor length up to 47 meters (154 feet), enabling the stadium to host even handball games, which take up the most ground space among indoor sports.

Previously, only volleyball, boxing or wrestling matches were hosted there.

Another focus of the renovation was its dome: the stadium used to be dark and lack any natural light. However, the improved dome has skylight windows in the shape of the taekkuk on the Korean national flag - the yin and yang halves of the circle - which will lighten up the arena.

Still, the city government has yet to determine how to put the renovated Jangchung Gymnasium on the same level as similar sporting facilities. Even though it’s located in central Seoul, which provides great public accessibility, most professional sporting facilities in the city are clustered in Songpa District, in the southeast.

The facility also has a 29-foot LED screen that can display full HD video clips. The gym’s reopening ceremony, attended by a number of sports stars on Saturday, even featured a performance by the rock band Boohwal.

“We’ll try to make it a cultural complex by hosting not just indoor sporting events, but K-pop performances,” said Lee Chang-hak, the chief of the city government’s Culture, Sports and Tourism headquarters.