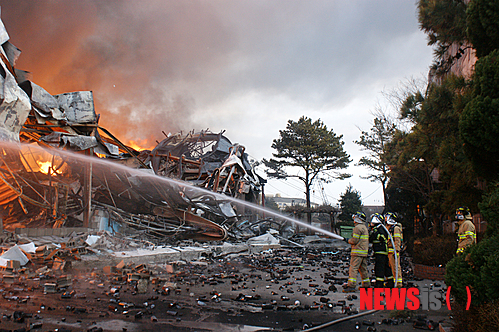 Fire fighters on Sunday extinguish a blaze at a portable butane gas factory in Cheonan, South Chungcheong. No casualties were reported at the Taeyang Industrial factory. [NEWSIS]

Two separate fires broke out over the weekend, one at a portable butane gas factory in Cheonan, South Chungcheong, and the other in an apartment building in Cheongju, North Chungcheong.

No deaths were reported, though five people received minor injuries in the latter.

Authorities said a blaze erupted Sunday morning at a portable butane gas factory in Cheonan, 92 kilometers (57 miles) south of Seoul, and was extinguished in six hours.

At least eight of the 28 buildings inside the Taeyang Industrial factory complex were burned to the ground. The facility had been closed for the weekend.

The property damage was estimated at 1.9 billion won ($2 million), according to fire authorities.

The exact cause of the accident has yet to be determined, though Bang Sang-cheol, the head of the Cheonan Seobuk Fire Station, said the fire appears to have ignited from a heater located inside a container. The container was set up as a temporary rest area for forklift truck operators.

Bang said the fire’s swift spread was also exacerbated by how closely the buildings were to one another in the factory complex. The sprinklers seem to have switched on, but proved to be of little help in bringing the fire under control, he added.

At least five helicopters, 470 fire fighters and 60 police officers were mobilized to the scene.

Taeyang Industrial, which produces the portable butane gas cartridge Sun Fuel, accounts for about 70 percent of the domestic market share.

On Saturday night in Cheongju, about 120 kilometers southeast of Seoul, a fire broke out on the rooftop of a 25-story Hyundai Daewoo Apartment building. Cheongju Seobu Fire Station said five residents were admitted to a nearby hospital for smoke inhalation, but that the injuries were not life-threatening.

Nineteen fire trucks and around 60 firefighters were sent to the scene of the accident. An overheated hot wire used to protect water pipes from freezing is suspected to have started the fire.

At least 240 residents were evacuated outside, including 70 who were escorted out by fire fighters.