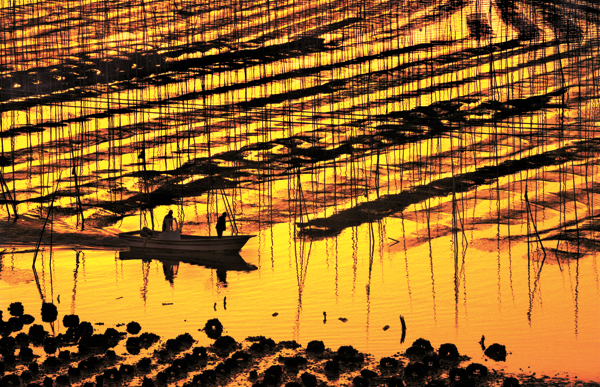 The ocean off Sookma Village in Gangjin, South Jeolla, in southern Korea is renowned for maesangi, or seaweed fulvescens, edible algae that only grows in clear, unpolluted coastal water in Korea.

The highly nutritious delicacy is popular because it is full of iron and potassium. Gourmets are particularly fond of eating it in a soup.

The seaweed, which the Ministry of Maritime Affairs and Fisheries selected as January’s seasonal marine product, is a signature food for winter in southern Korea.

It has a delicate favor and mild taste. Its texture is similar to egg drop soup - a bit sticky. It also appeals to people because of its distinctive flavor.

“The piles of seaweed fulvescens are thinner than silk thread and as dense as tufts of cow hide,” he wrote. “Its color is closer to dark blue and its soft and mild texture becomes tangled when it is cooked. The taste is sweet and aromatic.”

There is also an interesting proverb in the southern provinces of Korea about seaweed fulvescens: “When the impudent son-in-law visits, serve maesaengi soup.”

This refers to how the soup can scald mouths because people eat it without thinking as it does not emit steam even when it is extremely hot.

Collecting the spores of the seaweed should be done around Sanggang (Oct. 23) at the shoreline.

Offshore fishermen install nets weaved from bamboo under pebbles to gather the spores. About a month later, they drive bamboo stakes into the shoreline and bind the bamboo net they set a month ago horizontally. 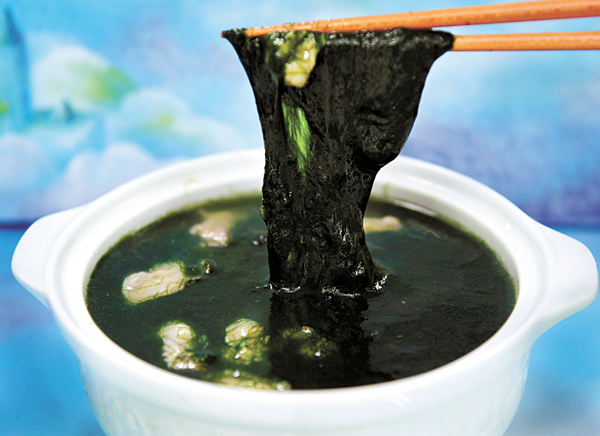 Harvesting seaweed fulvescens begins at the end of December. The way to gather it depends on the tide. The fishermen sometimes use a small boat to collect it, or wade into the sea in rubber boots to strip the seaweed from the net.

They occasionally work at night when they receive overflowing orders.

Lying flat all day in the severe winter weather to collect seaweed is not easy. And the work continues until the end of February.

About 80 to 90 percent of its production is from these regions. However, more and more coastal areas are beginning to collect the seaweed as it is incredibly profitable, according to the fishermen.

Although it is becoming more rare to see youths in rural areas, it is relatively easy to meet young offshore fishermen at fishing hamlets renowned for plentiful seaweed fulvescens. Younger generations are returning to their hometowns after discovering how lucrative harvesting this algae can be.

Some of the fisheries make more than 100 million won ($91,800) a year cultivating the produce.

In the old days, seaweed was the main source of income in fishing villages. But offshore fishermen became angry when seaweed fulvescens stuck to their nets because it was worth half the price of regular seaweed.

Offshore fishermen lie flat in order to harvest seaweed fulvescens from a net made with bamboo.BY PARK SANG-MOON

Both sexes harvest seaweed fulvescens, but only women conduct the process of washing the algae. They make fist-sized bundles of it and neatly package it in boxes. When stored, it looks like well-groomed pony tails.

Ko Ok-nam, who lives in Sookma Village, grinned and said, “We are running out of stock after seaweed fulvescens became famous for its healthy nutritional value. Customers have increased, but we cannot make as much as they need. It is physically hard to go to the sea to gather seaweed fulvescens, yet I am very happy that I can earn a lot of money as long as I work hard.”