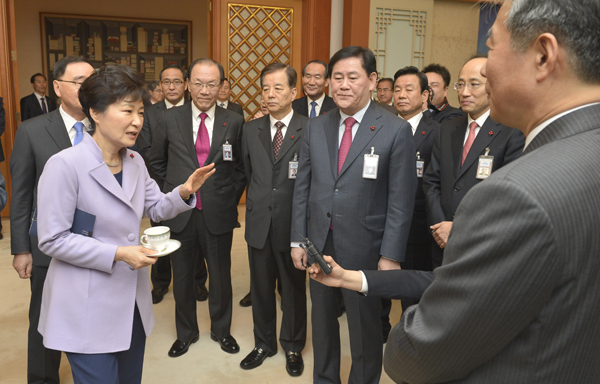 President Park Geun-hye talks to Finance Minister Choi Kyung-hwan, right, and other cabinet members on Tuesday during tea time, before presiding over a cabinet meeting at the Blue House. [NEWSIS]

President Park Geun-hye said Tuesday she will carry out a minor cabinet reshuffle and make some personnel changes within the presidential office to boost administrative efficiency.

Park did not elaborate on her reshuffle plan aside from saying that a new maritime minister needs to be appointed. No timetable for the shake-up was given either, although it is expected before the Lunar New Year holidays that begin Feb.18.

“I intend to carry out a small-scale reshuffle that is really necessary such as for the maritime ministry, where the ministerial post is now vacant,” said Park during a cabinet meeting.

It remains to be seen whether Chief of Staff Kim Ki-choon, in whom the president is known to have deep trust, will be affected by the reshuffle. Park has refused to let go of the 76-year-old former prosecutor despite repeated demands from the opposition.

People are also watching to see if three of Park’s key aides, who were referred to as the “three doorknobs” for their control of access to the president in a leaked presidential document, will be affected.

It’s considered unlikely that she will dismiss them given the strong stance she displayed during a press briefing earlier this month.

During the New Year press briefing, Park made it clear she rejected repeated calls from the opposition and some within the Saenuri Party that she let go of the trio to take responsibility for the behind-the-scenes power-struggle scandal prompted by the leaked document.

It’s possible she will replace Chung Hong-won as prime minister. Park tried to replace Chung last year but failed because two candidates in a row withdrew their nominations after ghosts from their pasts came back to haunt them. She told Chung to stay in the post.

The approval rating for the Park administration hit an all-time low of 35 percent in a poll conducted last week. That was seen as a sign of public disapproval of her refusal to dismiss her aides, including the three “doorknobs” and her chief of staff.

A recent backlash against changes in the tax code that will result in more tax on the middle class is thought to have added a sense of urgency to the administration to do something.

Reorganizing the cabinet and Blue House is a traditional way to get beyond scandals in Korean politics. As the Park government enters its third year, it needs public support for some ambitious goals, such as overhauling the pension for government workers and creating jobs.

The administration is free from some political burdens since no major election is scheduled throughout 2015.