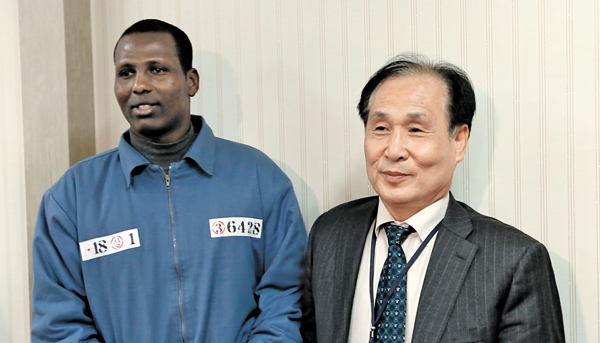 Capt. Seok Hae-kyun of the Samho Jewelry, right, meets Mahomed Arai, the Somali pirate who attempted to kill him in 2011, for the first time in four years. Today marks the fourth anniversary of the successful Korean naval raid on Jan. 21, 2011, to rescue the Samho Jewelry after it was hijacked. By Ahn Hyo-sung

Four years ago, Seok Hae-kyun, the captain of the Samho Jewelry, was nearly killed when his ship was hijacked by Somali pirates.

The Norwegian-owned, Korean-operated Samho Jewelry was seized by the nefarious seamen on Jan. 15, 2011, in the Arabian Sea en route to Sri Lanka.

The ship’s crew was rescued six days later by the Korean Navy.

During the operation, Seok was seriously wounded by gunfire from pirates.

Later that year, the Supreme Court upheld a life sentence for Mahomed Arai for hijacking the ship and attempting to murder the captain.

But the proceedings provided little closure for Seok, now 62, so on Jan. 14 - just ahead of the fourth anniversary of the mission - he decided to visit the Daejeon Correctional Institution to meet with the man who once tried to take his life.

The captain, now serving in the Navy’s Training and Doctrine Command, waited at the correctional facility’s visiting room, where he was greeted by a tall man in a sky blue prison uniform with the number “3-6428” imprinted across the front.

The pirate, Arai, now 27 years old, greeted Seok via an official at the facility who served as an interpreter.

“How is your health?” the captain asked the young man.

Arai responded, “I work here and my life has improved.”

He continued, “When I was in Somalia, we were so poor, and took to pirating for the sake of putting bread on the table, not knowing that it was such a bad thing.

“I am very sorry to you, captain,” Arai added.

Seok recalled the rescue operation, Dawn of the Gulf of Aden, in which the Korean Navy rescued Seok and his crew six days after their ship was hijacked.

“At that time, the Korean Navy’s operation was so scary we could not help but surrender,” he said.

The two spoke for around an hour. During that time, Seok expressed worry for Arai’s family, and advised him: “Learn a skill that can contribute to your livelihood for when you return home from here.”

“I have a lot of worries for my family back in Somalia,” the inmate acknowledged, “but I don’t know if I will be able to return.”

“If you live earnestly, you may receive a reduction in sentence,” Seok said.

He added that he hoped that there would be a day when other pirates like Arai - many of whom were also imprisoned alongside him - would be able to see their families.

“While I do not know when I will be able to return, I will live earnestly,” the young man answered.

Seok also spoke with the JoongAng Ilbo on Tuesday.

“At that time, I was the prisoner of the pirate Arai,” he said, “but now, Arai has become my prisoner.

“When I was shot by his bullet, I almost died but ended up living,” he added, “so I thought it was my fate to meet him one more time.”