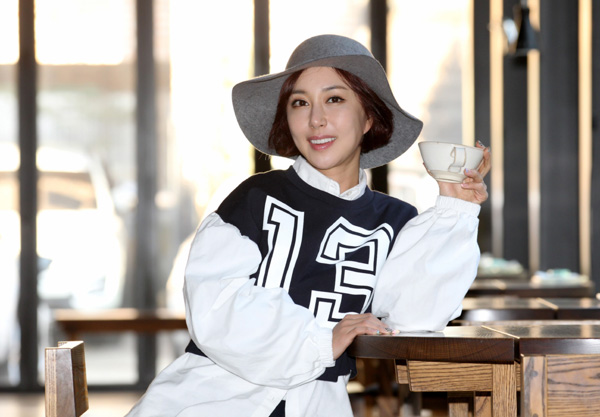 
The debut of girl group S.E.S. in 1997 changed the Korean music scene for good.

With their sophisticated melodies and girl-next-door image, S.E.S. quickly became a force to be reckoned with. Their third studio album, “Love,” sold 760,475 copies - still a record for a girl group in Korea.

Shoo, one of the three members of S.E.S., is enjoying renewed stardom after participating in “Saturday, Saturday, Singers,” two recent special episodes of MBC’s entertainment show “Infinite Challenge” that presented performances from ’90s star singers. The show proved to be explosively successful.

Shoo is now a mother of three and has spent most of the past 12 years raising her children.

But in her performance on “Saturday, Saturday, Singers,” she expressed how much she missed the stage - singing, dancing and sharing it all with the audience.

In a recent interview with Ilgan Sports, an affiliate of the Korea JoongAng Daily, Shoo shared what the comeback means to her as well as her thoughts on K-pop today.

Q. Were you able to remember all the songs and the moves?

A. Amazingly, yes. Apparently my body instinctively remembered all the moves. I even remembered what our dance trainer told us about certain moves, which was quite remarkable. We practiced very early in the morning as we had other commitments during the day. But it wasn’t so bad because we practiced after a good night’s sleep.

What did your husband and children say about your performance?

We’ve hidden our TV inside a closet because we don’t want our children to watch too much TV while growing up, so they didn’t see the show. In fact, they don’t even know that I was a singer once. To them I’m just a mother. But my husband saw it and he really liked it. He said he got goose bumps and shed tears.

Kim Tae-ho [the producer of Infinite Challenge] said you were one of the highlights of “Saturday, Saturday, Singers.” Did you know that?

Not really. But if I knew that maybe I would’ve given it 200 percent. It’s not that I didn’t do my best, but I tried not to get too excited. I guess I didn’t want to be disappointed. You know how you get disappointed if you expect a lot. In fact, there have been many discussions about an S.E.S. comeback over the years, but whenever it didn’t work out I got very disappointed. So when I was approached about “Saturday, Saturday, Singers,” I told myself to take it easy and just have fun.

Why do you think people responded so much to “Saturday, Saturday, Singers”? Is it just nostalgia?

I think there’s more to it than that. I think songs from the era were just really good. People in the current generation may find it plain and dull, but there were songs that you wanted to buy and possess, as records, unlike songs you download and delete after some time. For that reason I’m not sure if there could be a “Saturday, Saturday, Singers” in 20 years for singers today. In my days, having our own color and individuality was important. But it appears that today’s singers are all too similar.

What are S.E.S. members in their mid-30s like? And what kind of a comeback do you envision?

Bada and Eugene appear to be doing what they really like and are enjoying a certain amount of freedom. In our days, we were smiling and giggling on stage, but after the show we were all extremely tired. We weren’t even appreciative of our popularity. If we perform together again, I think it can be more sophisticated, like focusing less on dances and just on clear vocals with a nice orchestra.