Banks too reliant on fees

Banks too reliant on fees 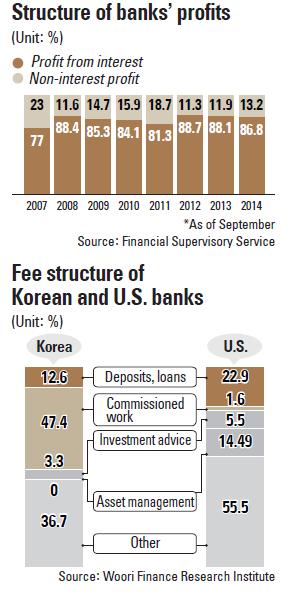 Despite the lowest interest rate ever, commission fees for bank services remain high, adding to the burden on consumers.

They are upset because in addition to earning little from interest, their banks are also requiring them to pay fees if they repay a loan early.

In May 2003, then-Choheung Bank announced it will raise its fee rate to 1.5 percent of the value of the loan for debtors who decide to repay loans at least two years earlier than their maturities. Then-Cheil Bank set the same 1.5 percent rate, while Shinhan Bank demanded 2 percent. The benchmark interest rate was 4.25 percent at the time. A one-year time deposit offered consumers interest rates of between 4.4 percent and 4.5 percent.

But now in 2015, the fee rate is at 1.5 percent at all banks. Although the rate remains the same as 12 years ago, the key interest rate has been lowered to 2 percent, the lowest since 2009. Time deposit rates are in the 1 percent range.

In May 2013, the Financial Services Commission (FSC) and Financial Supervisory Service created a task force to supervise banks to make sure they reduce the commission fee rate.

But over the 19 months since the team was created, no bank has dropped its rate.

State-run Industrial Bank of Korea (IBK) decided to lower its fees for early repayment of loans just last week, but other commercial banks have no plan to do so, because commission fees are currently their main source of profit.

IBK said it will cut the rate from the current 1.5 percent to around 0.5 percent on Feb. 5.

The FSC distributed a research paper last week that says the fee rate for a loan should depend on the type of loan, in an effort to encourage banks to lower fees. But the authority thinks it will need to intervene.

Banks are using the low spread between deposits and loans as an excuse.

“Our bank is considering cutting the rate within the first half of the year, but it is hard for commercial banks like us to immediately follow the state-run bank,” said a bank executive who declined to be named.

Some banks are even ending existing fee exemption services. Woori Bank scrapped its fee exemption on overseas remittance through online banking on Jan. 10. Hana Bank canceled its exemption for subscribers to pensions on Jan. 2.

And some banks are creating new fees. IBK added a fee for customers who use its telephone banking service to transfer money to other banks.

Consumers are taking the brunt of high fees amid low interest incomes.

“If we take out more loans or extend loans, they don’t give us extra money,” said a 42-year-old corporate employee surnamed Park. “But why do they demand these fees when we repay the loans?”

Analysts say there are fundamental problems in the structure of charging commission fees for profit at local banks. The major problem is that banks are creating unnecessary fees to make up for profits they’re not getting from other areas.

“While fees for remittance, account creation and deposits are low, those for funds and bancassurance products are high, which are not part of banks’ traditional work but are commissioned by non-banking institutions,” said Noh Jin-ho, a researcher at Hana Institute of Finance.

From 2011 to 2013, the average percentage of profits from commission fees that banks received accounted for 47.4 percent of their total profit. The average for U.S. banks was 1.6 percent.

This abnormal profit structure is harmful to banks.

“Fees for selling funds and insurance were an alternative for low margins from ordinary deposit products,” said Kim Woo-jin, a researcher at Korea Institute of Finance. If the fees stay high, they could lead to a bad relationship between consumers and banks.