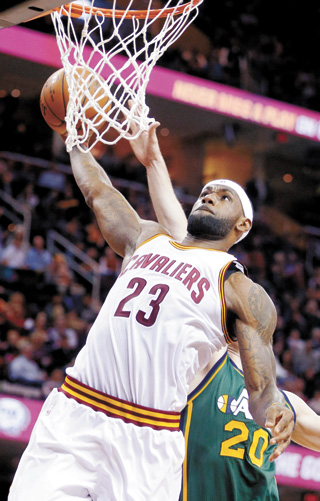 Cleveland Cavaliers’ LeBron James goes in for a dunk against the Utah Jazz during their NBA game Wednesday in Cleveland. [AP/NEWSIS]

After Kevin Love dunked, the Cavaliers exchanged smiles, approving nods and a flurry of fist bumps and high-fives as Quicken Loans Arena rocked during a timeout.

This was the moment Cleveland desired for weeks - the Cavs at their creative, dominating best.

It was inevitable. It was awesome.

Shaking off a flu bug that forced him to miss practice Tuesday and that also slowed Kyrie Irving, James added nine assists, seven rebounds and exacted some revenge on Utah’s Gordon Hayward.

The Cavs improved to 4-1 since the four-time MVP returned after missing eight games with a strained back and knee. Cleveland went just 1-7 without the superstar and now that he’s back, James wasn’t going to let a sore throat, stuffy nose or body aches keep him off the floor.

Irving added 18 points and Timofey Mozgov 16 for Cleveland, beginning to find its stride following a stretch of injuries and two major trades. J.R. Smith had 15 points, and all five Cavs starters scored at least that many for the second straight game - a franchise first. Until that happened on Monday, the Cavs hadn’t had that balance and production in the same game since March 16, 1993.

The Cavaliers are the first team to have all five starters score 15 points in back-to-back games since the Los Angeles Clippers did it in 2008.

Enes Kanter scored 24 with 17 rebounds and Hayward scored 14 for Utah, which has dropped five of six and four straight road games.

Later in the period, the Cavs had perhaps their most memorable sequence this season. Hustling back on defense, Smith used both hands to blindly back tap a loose ball to Tristan Thompson, who handed it off to Irving on the fly. Cleveland’s point guard nearly fell before gaining his balance and feeding Love with an alley-oop pass for a dunk to give the Cavs a 74-48 lead.