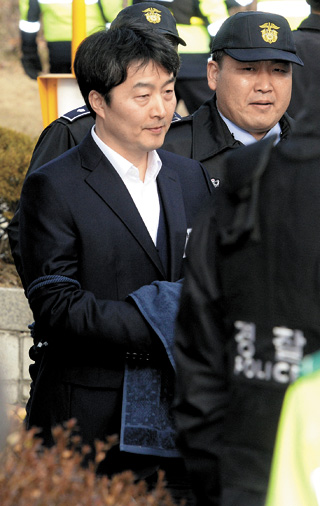 After being declared guilty of instigating an armed rebellion and violating the National Security Law by the Supreme Court, Lee Seok-ki is escorted back to the detention center in Seocho, southern Seoul, on Thursday. [NEWSIS]

The nation’s highest court on Thursday rejected the prosecution’s charge that a former lawmaker of a disbanded leftist party conspired to overthrow the government by forming an underground organization.

But it still found Lee Seok-ki guilty of instigating an armed rebellion and violating the National Security Law.

Upholding verdicts handed down by the Seoul High Court, the Supreme Court confirmed a nine-year prison term for Lee for inciting a rebellion in the South in the event of a war against North Korea - although falling short of having a detailed plan - and for praising the Communist regime. Lee was also stripped of the civic right to run for office for seven years following his release from prison.

Following a series of raids, arrests and questioning by law enforcement authorities including the National Intelligence Service, Lee, then a lawmaker of the now-outlawed Unified Progressive Party (UPP), was indicted on Sept. 26, 2013, for plotting a rebellion against the South, the first such antistate case in 30 years. Other members of the former third-largest political party were prosecuted along with Lee.

Lee and six others were convicted of all charges by the Suwon District Court in February last year, but the Seoul High Court overturned one of the key charges against Lee and commuted his prison term from 12 years to nine in August.

The Supreme Court on Thursday upheld the appeals court’s ruling that the prosecution failed to present sufficient evidence to prove that Lee had actually conspired to overthrow the government by forming an underground organization. The Seoul High Court’s rulings on six other former UPP members were also upheld.

“To convict the accused of conspiring to commit insurrection, the plot must have a target and goal, although there might not be a detailed agreement,” Supreme Court Chief Justice Yang Sung-tae said as he read the verdict. “And the accused must have an agreement on key issues and the actual danger of the agreement must be recognized.

“During a discussion, the participants freely talked about the acts of violence, but it is hard to say that they had reached an agreement,” Yang said.

“And there was no circumstance in which they had prepared to implement the planned violence. We cannot conclude that they had made a definite decision to commit insurrection, a critical condition to punish them for the charge of conspiring to overthrow the government.”

The Supreme Court, however, ruled that Lee had encouraged insurrection.

“In preparation for a war on the Korean Peninsula, Lee presented various physical and technical means and standards for action plans in intelligence, propaganda and the military field including acts of violence such as destroying the country’s infrastructure,” Yang said. “And he urged the participants to strongly implement the plans nationwide. Amidst the continuing provocations by the North, his remarks were a dangerous act of instigating insurrection.”

Lee was accused of forming a pro-Pyongyang underground group called the Revolutionary Organization, or RO, but the Supreme Court said the prosecution had failed to present sufficient evidence to prove the charge.

“There is a suspicion that a special organization with a doctrine exists and about 130 people are members of this group,” Yang said. “But the testimonies of an informant on the RO are largely speculation and their evidentiary power is not strong. The case also lacked other objective evidence to support the suspicion.”

Yang said no data on when the 130 members joined the group and what activities they had carried out was provided, concluding that the prosecutors failed to prove their argument on the existence of the RO beyond a reasonable doubt.

The Supreme Court’s ruling on the existence of the RO was different from the Constitutional Court’s decision made last month in a separate but related case, and the contradiction is expected to have political and legal repercussions.

Based on the investigation into Lee and other senior UPP officials, the Park Geun-hye administration took the unprecedented step of asking the Constitutional Court to dissolve the UPP for its alleged links to North Korea on Nov. 5, 2013. The Constitutional Court ordered the dissolution of the UPP for its pro-North Korea doctrine and removed all five of its lawmakers, including Lee, from the National Assembly.

One of the key grounds of the Constitutional Court’s decision to dissolve the party was that the members of the RO, who discussed rebellion, were the main leaders of the party. The court also concluded that Lee and others met to commit violence to destroy the country’s infrastructure, produce and seize arms and interfere with communication, a de facto ruling that they had plotted a rebellion.

Following the Supreme Court’s ruling, Hong Sung-gyu, who served as the spokesman of the UPP, issued a statement. “It was confirmed once again that there was no RO and there never was a conspiracy to commit insurrection,” Hong said. “The case was fabricated to make us a political scapegoat to cover up the National Intelligence Service’s meddling into the presidential election [of 2012].”

Over the past few years, leftist politicians argued that the Park government went after them with the treason charges in order to divert public attention from another political scandal in which the main spy agency was suspected of helping Park during the 2012 presidential election campaign.

The conflicting rulings by the Supreme Court and the Constitutional Court are expected to influence the administrative suit filed by five former lawmakers whose seats were take away when the UPP was dissolved. Arguing that the Constitutional Court has no legal power to take away their seats, Lee and four other politicians asked the Seoul Administrative Court earlier this month to reverse its decision.

Prosecutor Jeong Jeom-sig, who headed the Justice Ministry’s task force on legal measures against the UPP, expressed disappointment at the Supreme Court’s ruling.

“The Supreme Court is making a very strict interpretation that one must be just a step away from committing a rebellion to punish someone for conspiring to commit insurrection,” Jeong told the JoongAng Ilbo.

“If we had solid evidence on the RO, the prosecution would have indicted Lee on charges of creating an antistate entity,” Jeong said. “The Supreme Court made an unnecessary ruling on a charge that we didn’t even file.”

While the gravest charge was rejected by the Supreme Court, Lee’s lawyers condemned the court for convicting Lee on other charges and keeping him in jail. “The tsunami of McCarthyism swallowed the Constitutional Court and now destroyed the Supreme Court,” said Kim Chil-jun, head of Lee’s defense counsel.

A spokesman of the Supreme Public Prosecutors’ Office said it was disappointing that not all charges were accepted, but that it respects the court’s decision.