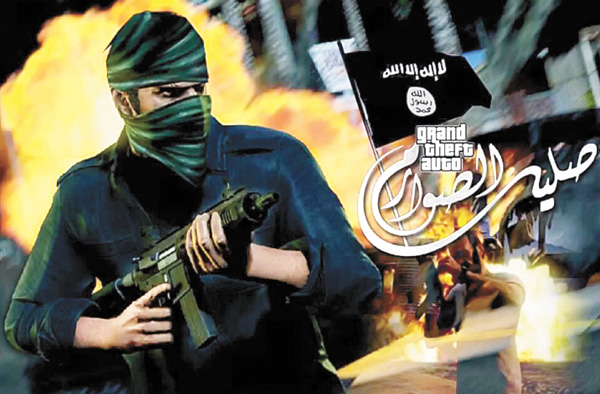 A propaganda video for ISIS recruitment depicts a jihadist shooting a policeman. It reads, “Do it as you do the game.” [YouTube screen capture]

The 18-year-old teenager who disappeared in Turkey after showing interest in a violent jihadist group has seen his Twitter followers increase fivefold this week, with a number of those youths inquiring how they can join the Islamic State in Iraq and Syria (ISIS).

Kim, a middle school dropout, vanished on Jan. 10, in Turkey, leading to speculation that he had intentionally traveled to Kilis, near the border with Syria, to join ISIS.

Korean police investigations back that Kim had shown active interest online over how to join ISIS in the months leading up to his arrival in Turkey on Jan. 8 with a family friend, a 45-year-old man surnamed Hong.

And following Kim’s suit, there have been a recent increase in inquiries on how to join the extremist Islamic group via SNS, leading to concern that Kim’s case might trigger other impressionable youths to follow his lead.

Kim had made inquiries on social networking sites including Facebook and Twitter on how to join ISIS in the months before his disappearance.

The 18-year-old gained more than five times as many Twitter followers overnight, as reports exploded in the media this week that Kim may have crossed into Syria in an attempt to join the jihadist group.

On Tuesday, Kim had 70 followers on Twitter, which increased to 370 the next day. He currently has more than 400 followers. Some of his followers even went on to message ISIS-linked accounts with which Kim had made contact over the past few months. One Korean Twitter user asked, “I want to become a member of IS, let me know how to join.”

Another Twitter user sent a message in Arabic to an ISIS-linked account that Kim had previously contacted.

“Adolescents who want to become a hero but have weak critical-thinking abilities [may try to] use joining ISIS as a means to self-realization,” she said. “If Kim is used to promote ISIS, there could be a serious problem”

Korean police investigations over the past week have led to the conclusion that there is a high likelihood that if Kim did join the jihadist group, he did so voluntarily.

The Seoul Metropolitan Police Agency concluded that the teenager had been “obsessed with a trip to Turkey,” and data shows he expressed a deep interest in ISIS.

Hong, a minister who accompanied the teenager to Turkey, has been criticized for reporting the missing boy on Jan. 12, two days after he went missing.

He testified to police that he called the Korean Embassy on the day Kim disappeared but was directed to an automated message.