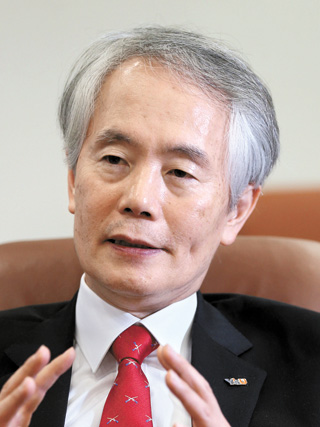 The KCUE is a consultative body of four-year college presidents. His appointment comes at a challenging time, as the Ministry of Education conducts assessments to reform universities. The ministry plans to reduce the university entrance quota to 400,000 from the current 560,000 by 2023.

According to the ministry, universities might have to significantly cut their entrance quotas or else be suspended from receiving financial assistance from the government.

“The Ministry of Education is enforcing quota reductions without envisioning how higher education should be in the future,” Bu lamented.

Q. What is KCUE’s vision?

A. First, we need to create a global university by integrating several regional state universities. During integration, the government must give the funding that it provided to these universities in one lump sum.

The Education Ministry believes entrance quotas should be reduced further.

According to the ministry’s evaluation, even healthy private regional universities should cut quotas up to 30 percent, which would force the schools to collapse. If state universities and prestigious private schools reduce the quota for undergraduate schools, small and medium-size universities will adjust their quotas.

Students claim that tuition fees are too high compared to the quality of education.

Although there are universities that have serious financial problems, the Ministry of Education’s call for cooperation is so strong that most universities are trying to freeze tuition fees. Even though they were forced to cooperate this year, there must be solutions next year.

It is also questionable whether legally limiting the rise in the tuition rate is constitutional. Universities that charge high tuition rates while providing low-quality education will likely not survive.

There have been a series of errors in the College Scholastic Ability Test (CSAT). What is the desirable college entrance direction?

I personally believe that the CSAT should be a simple qualifying exam for college education, and universities should test students based on their critical thinking and passion.