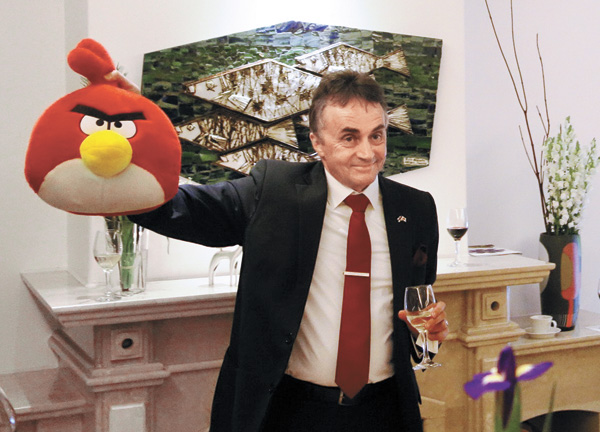 Ambassador of Finland Matti Heimonen cites video game franchise Angry Birds as an example of innovation in an interview Wednesday at his residence in Seongbuk District, northern Seoul. Provided by the embassy

There is room for cooperation between Korea and Finland in the areas of innovation, technology, ICT and academia, said the ambassador of Finland to Seoul, Matti Heimonen, last week.

Heimonen hosted a reception for a 45-member business and cultural delegation from Espoo, the second-largest city in Finland, at the residence of the Finnish ambassador in Seongbuk District, northern Seoul, last Wednesday.

Espoo is a center of Finland’s start-up scene and is home to hundreds of innovative small- and medium-size enterprises.

“Collaboration in the areas of technology, ICT and start-ups may turn a new page in cooperation between Korea and Finland,” said Heimonen.

He said that Espoo, which describes itself as a “garden of innovation and adventurous experiences,” is based on ideas similar to Seoul’s campaigns for a creative economy as well as global green growth.

The performances by the Tapiola Sinfonietta in Seoul highlighted the fact that this year marks the 150th anniversary of the birth of the composer.

The Espoo delegation, led by Tuula Antola, director for economic and business development in Espoo, and Susanna Tommila, the city’s cultural director, concluded a four-day trip to Seoul on Saturday.

The visit was an opportunity to introduce the concept of Espoo’s “Innovation Garden” to Korea’s entrepreneurs, art and education institutions, health centers and technology clusters, such as the Pangyo Techno Valley in Gyeonggi.

“Both Europe and Asia are changing,” said Antola. “The public sector plays an important role in facilitating start-ups’ entry to international markets.”

She added that the visit may lay the foundation for future business collaborations between Seoul and Espoo and the entire Helsinki metropolitan area.

Examples of Finland’s innovation in technology include the overnight success story of Finish start-up company Rovio, whose Angry Birds video game is massively popular in Korea, as well as Nokia, Finland’s global telecommunications company, which has been headquartered in Espoo dating back to 1865.

Antola said, “It is always the new companies that renew our economies.” 