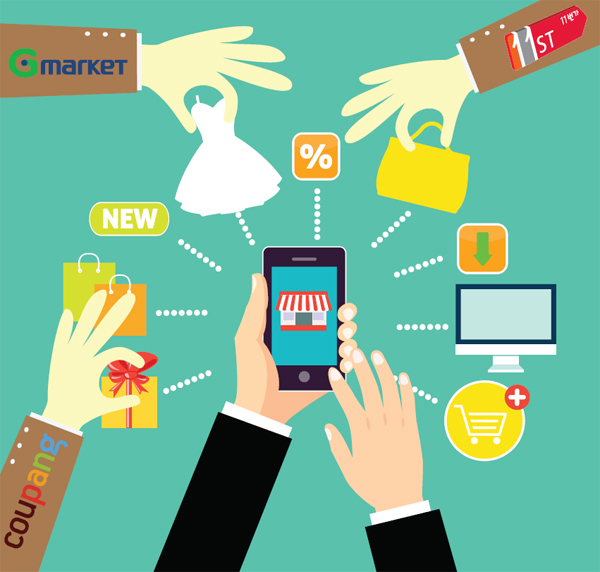 Kim Jin-young was looking for a birthday present for a friend and thought a pair of gloves would be just right. But when she used the keyword “gloves” in a search on G-Market, a popular e-commerce site in Korea, she was faced with a daunting 227,100 results.

Even when the 28-year-old sorted the results by a single brand, hundreds of different gloves from the label were offered.

Overwhelmed with the results, Kim was turned off the purchase.

“I didn’t have enough time to sift through all of the items and even if I did, I don’t want to do all the price comparisons, going back and forth checking images of each item,” Kim says. “It’s time-consuming and totally tiresome.”

Still, she wanted her purchase to be successful in terms of prices, design and the relevance with the fast-changing trend.

Then, one of her colleagues recommended the so-called curated online shopping malls, where goods filtered by editors or consumer trend experts are offered. Those sites often describe how many consumers liked the selection and made purchases.

“I spotted the gloves by METROCITY in the Deal of the Day section on G9,” she said, “They were 25,000 won, which I think was a fair deal, and the item was selected by specialists. ”

She made her decision in less than 10 minutes and ordered the gloves.

In the early days of online shopping, people were excited by the fact that a vast assortment of products could be seen with the click of a mouse, something that would have required hours or days of shopping in brick-and-mortar stores.

But large online retailers such as G-Market, Auction and 11st went too far by showing hundreds of thousands of products in a single search. Shoppers rebelled against the cognitive overload.

The shift to curated commerce also debunks a widely held assumption that consumers carefully study potential brands or options and methodically narrow them down, a process known as the “purchase funnel.”

Flesh and blood shoppers aren’t that methodical. Increasingly, they are being drawn to clearer and simpler shopping choices.

“We realized that shoppers are getting sick and tired of the seemingly endless options,” said Hong Soon-cheol, deputy head of a communications division at G-Market said.

The e-commerce giant opened G9 in April 2013, which is available on PCs and smartphones. About 30 products are recommended on the home page on a daily basis. Half of them are revealed at 9 a.m. and the other half at 5 p.m.

“These times are prime commuting times,” said Hong. “We found that many people like browsing products with their cell phones at those times.

“We are focusing on mobile shoppers because they are likely to be attracted by the simpler display of G9, which is suitable for the interface of a smartphone application,” Hong added.

Transactions made through mobile shopping in 2014 are estimated to be valued at 13.14 trillion won, a 122.3 percent increase from the previous year, according to Korea Online Shopping Association.

On the other hand, PC-based shopping decreased by 5.4 percent. The group predicted that mobile shopping transactions will jump by 70.9 percent this year.

The promise of mobile shopping and people’s need for more filtering of shopping choices led G-Market to redesign its main G-Market page to offer choices by editors.

“That time is when people have some extra free time after getting important things done at work or home,” said Lee Yoon-seong, a public relations official at 11st.

“But during the weekend, people do online shopping at night.”

The retailer tracked users of the new platform throughout last year and found that the greatest number of purchases were at 11 a.m. on weekdays and 11 p.m. on weekends.

Female users outnumbered male shoppers on the site last year with a ratio of 57 percent women and 43 percent men.

When broken down further, women in the 30s were the most fervent users, according to both G-Market and 11st.

“It seems that working moms and office women really like the site because they are usually busy and the curation helps them make decisions more quickly and easily,” the company said in an e-mail interview with the Korea JoongAng Daily.

Popular items on the site include diapers and baby formula, the top sellers. Also popular are electronic coupons for coffee shops and restaurants.

“I often shop on smartphones during my commute. At home, I’m preoccupied with taking care of my baby and there is really no time to sit down in front of the computer and go over the different products,” she said.

“And when I buy things on the curated sites, I feel that my purchase is somewhat guaranteed by someone.”

Operators of the shopping platform said editors pick goods based on prices and quality.

Transaction records prove the popularity of such shopping platforms. 11st said the amount of transactions on Shocking Deal 11 a.m. more than tripled last October compared to March of the same year, which is the latest data available.

Online retailers that started off as daily deals site spotted the lure of curation earlier than bigger commerce sites.

Coupang began using the approach when it first started its business in 2012.

“We only feature about 500 items filtered by our editors,” said Kim Mi-hwa of Coupang. “Through the selection, we can offer a more valuable shopping experience to our customers.”

The approach also mirrors the company’s focus on mobile shopping.

“At the beginning, we put emphasis on mobile shopping when fewer retailers were interested,” Kim said.

Coupang ranks No.1 in terms of the number of shoppers who used the application for 30 months in a row, according to Korean Click. Approximately 75 percent of its transactions come from mobile shoppers, the company said.

Retailers with a stronger offline presence are set to try their hands at curating.

Lotte will devote a section to goods selected by its experts starting next month on its online shopping mall lotte.com.